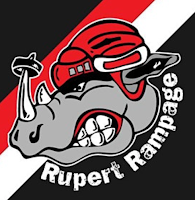 The always loud Jim Ciccone Civic Centre was in full throttle Saturday night as Northwest rivals the Terrace River Kings made the treacherous drive to Prince Rupert for a showdown with the Rampage, the travel conditions perhaps making for some additional jump for the visitors who keep their undefeated season intact with a 2-1 victory.

Despite the River Kings being a bit understaffed for their road trip, the Saturday night contest was closely played match up, the depth of the Terrace bench coming through to fill in the gaps in the line up in defence of their undefeated status.

The game remained scoreless through fifteen minutes of play before the Rampage opened things up with Colten Waldhaus breaking the ice, assisted by Jared Meers at 15.13.

The second frame saw some good chances but no goals, with the Rampage destined to be shut out in the third, the Rhino's holding tight to the 1-0 lead until Terrace's Gianni Carmano evened the scoreboard up at 16:39.

Eight minutes later, at 4:21 of Overtime it was Colin Bell who had assisted on the Carmano equalizer, scoring one of his own securing the 2-1 win for the visitors and sending the Rampage fans off to their disappointment at the result but not the effort on the ice.

The marker for Bell moves him closer to team-mate Ryan Rosebbom for the leagues top score honours.

As is the case when the two rivals get together, the two teams tangled on the ice, picking up where they left off from days past in the time before COVID.

The First period found the River Kings in an ornery mood assessed 4 of the five penalties in the first twenty minutes. The roles reversed in the second as Rampage players sat in the penalty box for five of the eight penalties assessed.

Things settled down significantly in the third and OT, with no penalty calls made, leaving the players to dig deep to try to put away the winning marker.

Tyran Hunter earned the River King victory in the nets, turning aside all but one of the 22 shot she faced, Kieran Sharpe was up to the challenge from the River Kings, facing down thirty shots, surrendering just 2 on the night.

The full scoresheet for Saturday night can be reviewed here.

Another COVID maximum sell out of 525 took in the contest which was also  big night for the Salvation Army and KidSport to name a few.

Terrace will be looking to head into the holidays atop the CIHL Standings as an undefeated team with one more game at home on Saturday against Hazelton.

The Rampage who had a month off prior to Saturday night  now have close to another one off, they do not return to action until early January when they hit the road for Vanderhoof and Hazelton on January 8th and 9th.

More notes on the Rampage and CIHL can be found from our archive page.