With praise for the efforts of staff on Capital Spending preparations, City Council makes quick work of the approval list for 2022

Prince Rupert Council members received a forty eight minute tutorial on Monday afternoon of what their senior staff members believe are the must haves for 2022.

That as the City's Chief Financial Officer Corinne Bomben served as presenter and moderator for the Capital Project and Spending Presentation session.

The afternoon session was attended by a majority the Council Membership in person, with Councillor Niesh taking part by phone, Councillor Skelton-Morven did not participate in the Monday event.

As the program moved forward, Ms. Bomben outlined each line item from her Report for Council  (available from the Agenda Package) which provided for the details on Spending plans in both Operations, Policing and Fire/Rescue as well as some of the City's large scale Civic improvement programs such as the Waterfront plans and those for the CN Rail building on the Waterfront.

"As far as content, this document sees the larges request to continue the work on our large utility projects as well as investments into protective services and investments at the waterfront.

As far as financial impact to our citizens and businesses the proposed amount of funding to come from taxation is 200,000 dollars less than in the previous year, or approximately a one percent decrease to the mill rate with respect to capital items funded as compared to 2021"   -- CFO Corinne Bomben introducing the 2022 Capital Budget presentation on Monday

The synopsis of spending, the majority of which comes from reserves, surpluses or funding from other sources can be reviewed below: 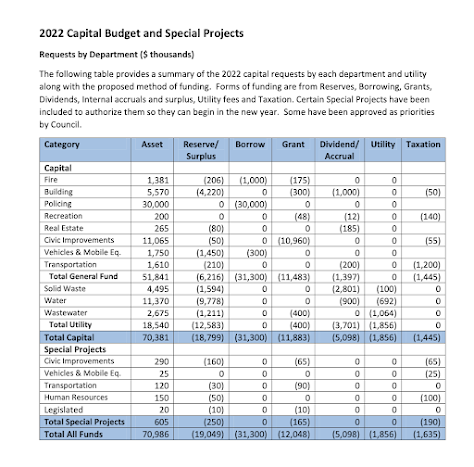 For the most part Director of Operations Richard Pucci was the main speaker from staff, called on a number of times to speak to some of the spending or to clarify some of the elements up for review on the afternoon.
There were only a few items from the lengthy list that the Council members made inquiries on during the presentation.
Below are a few of the themes that were explored:
Councillor Mirau spoke to the themes of cost savings on the plans for renovations to the city's boiler replacement program, a project which we made note of a few weeks ago.

We took a look at the Capital spending plans on Monday morning as part of our Council Preview package , you can review some of the details towards the spending themes for 2022 here, which includes a link to the Report from the Council Agenda. 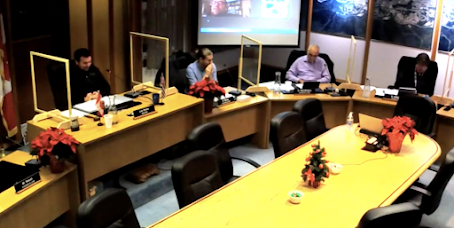 When they returned to the Council chamber at 7PM the Prince Rupert Council members had much to say in praise about the work of staff in preparing the Capital Spending  plan for 2002 and for their participation in the Monday afternoon information session.
As for the spending plan, at the evening session the Councillors had few things to note about the volume of spending, taking less than five minutes to move forward on the extensive list of spending on programs, projects and vision plan elements for the year ahead.
Councillor Cunningham led off the members who were unanimous in their praise of the work of city staff in compiling the Report on Capital Spending and the participation of a few of the city staff members during the afternoon session.
"I'd like to thank the staff that came today, as well as the staff that prepared this report, it was quite in depth and I think they should be recognized for what they've accomplished"
He also noted of the format that was used in the afternoon, and noted if any residents have questions they can contact the council members to go over any items that they have questions on.
Councillor Mirau spoke to the investments being made towards the city's infrastructure and list of projects towards development themes.
"I think there's a lot of good reasons for us to support staff's recommendation on this capital budget, first of which they make it easy when you can hold the line on taxes;  so barring any unforeseen issues in the new year I think we're on pace to at least be able to hold the line, I'm hoping.
More importantly though I think that this capital budget is an investment into our city's future that is consistent with our kind of stated strategic plan.
Whether it's  CN Building revitalization, Canfisco Warehouse Parking, new RCMP detachment, finishing off the dam, recreation improvement all those things that are over and above our regular operation requirements.
But then there's lots of investments to in things that are either cost or energy or environmentally friendly  investments. New Boiler and HVAC system, new pump truck for the Fire Hall to keep everyone safe, new plow quite timely today, commerical garbage truck  and landfill dozer, the list goes on.
I appreciate how thorough you guys were in preparation of this budget and there's plenty of reasons for me to support this budget as it was written.
Councillor Adey also praised the work of staff and the focus on strategic planning that they have taken on, as well as to continue to advocate for transportation planning and the wastewater plans in motion.
"I'm also happy to support the package as it stands, very impressed with the degree which you've taken in to account the need to develop strategic plans moving forward in various areas"
Councillor Randhawa echoed some of the same as themes as the previous members.
Councillor Niesh, also saluted staff and called attention to the plans for one million dollars towards paving that the capital spending will bring to the community.
Councillor Cunningham had the final word on the topic recapping the presentation process that took place.
"It was very well explained, I think it was well done. Each department got to say what they wanted to and what we need, and it's not very often that we have the expertise of our staff in a meeting to explain different things, especially in front of council or in a forum in front of the residents"
The Mayor added his own thoughts of support for staff for their work before bringing the topic to an end.
Council then gave approval for the Spending list as it was presented earlier in the day, coming in at just under 71 million dollars detailed for 2022.
You can review the Council discussion to the topic from the Regular Council Session video, starting at the one Minute mark.

More notes on the Monday Council Session can be explored here.
How all that spending will evolved through the year can be followed through our Budget and  Major Infrastructure  and planning archive pages.