But the afternoon of reviews of why and previews of how and when, also featured a few of the larger in scope Vision planning themes that City Council has been moving forward since the Hays 2.0 presentation of 2018.

Ms. Corinne Bomben, the City's Chief Financial Officer provided for the short overview of the Projects as part of the Monday presentation session, starting with a thumbnail sketch of the 5.3 million dollar refurbishment of the CN Station at RotaryWaterfront Park.

Funding for the CN Station Revitalization  project will come from three sources, 4 million to be taken from Civic Reserves, 1 Million from the City's Dividend Account and 300,000 dollars from a Grant. 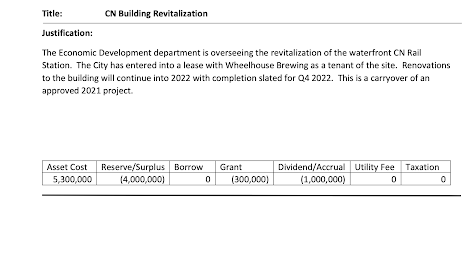 The City Council members did not have comments or observations to share, or questions to ask about the renovation project at the Old CN Station during the Monday presentation.
While they took a pass on a comment or two on the plans, Mayor Lee Brain did have some enthusiasm to share with the followers of his Facebook page later in the week.
With a Thursday update, making it official that the Wheelhouse Brewing Company would be moving into the renovated property in 2022, as well as to review some of the previous notes on the renovation plans to what the Mayor describes as a flexible city asset.

In late August, City Council hosted a presentation from the architects that are handling the design and renovation work on the waterfront site.
At that session,  Charlie Maddison from Boni-Maddison delivered an extensive overview of what the work of the renovation will require and what the new structure will provide in the way of amenities for the local brewery.
As the Mayor also noted in his teaser of Thursday, there are more announcements to come in the New Year, with one item of focus that of the area surrounding the CN Station which  is destined for a new look.
In his social media message of Thursday, Mr Brain observed how the City is set to move the Airport Ferry Dock to the location; as well as to redevelop the waterfront area around the Rotary Waterfront Park in partnership with the Gitxaala Nation.
The cost of that significant remake for the Rotary Waterfront Park area will come with a price tag for the City of close to 11 million dollars, the majority of which is stated to be coming by way of grants from senior levels of government.

The topic of the waterfront plans was a short one on Monday, with Ms. Bomben once again providing for the snapshot of the financial themes of the development.

As it was with the CN Station portion of the presentation, the Council members had no comments, thoughts or questions to share on the plans for the expenditure.

Other items listed as part of the city's Civic Improvements listings included:
Streetlight Replacement, Cemetery Sidewalks,  Eidsvik Park renewal and resurfacing of the McBride Sport Court.
The details to those projects can be reviewed from the city's synopsis notes below: 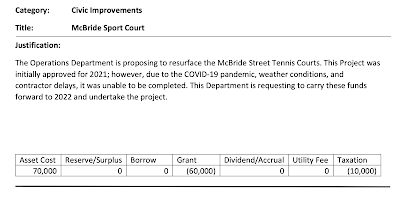 You can review more of the Monday Capital Spending presentation and the follow up to it which came on Monday evening as part of the final council session of the year from our notes of Tuesday.
To explore some of the past history for many of the projects proposed or in motion see our archive page.
Posted by . at 9:06 AM