Whatever was in a letter provided to Prince Rupert City Council on Monday from the Friendship House, the contents more than impressed the city's councillors, with Mayor Brain and Council making quick work of a request for a letter of support towards the Friendship House plans to seek out NDIT funding for their existing Highway shuttle program of twice a week transits to Terrace.

We made note of the new funding available across the northwest earlier this month, with the Provincial government allocating over 7.9 million dollars in Safe Restart money to those with an interest in Transportation access in the region.

Monday night, as part of a late addition to the City Council session, the Council members were asked to provide a letter of support towards the local organization and its quest for funding; though a copy of the letter seeking that support was not included for review of the public in the Council agenda package of the night.

While that NDIT funding is the pool of money that the Friendship House is applying for, the list of other applicants to take up the call for service,  apparently won't include the City of Prince Rupert,.

Which continues it seems to have no interest in joining other municipal and regional governments in providing for the expanded schedule of BC Transit options of connectivity found from Terrace to points east.

To recount some of the history in connecting communities across the region, some previous funding from the Province was delivered to municipal and regional governments  back in 2017.

With Terrace Mayor Carol Leclerc at the time noting somewhat wistfully of the absence of Prince Rupert as part of the collective of community Transportation.

Alas, it appears Ms. Leclerc will remain disappointment that the bus stops at the Terrace city limits, with no continuation to the North Coast.

Mr. Brain observing on Monday as to how the City hasn't in the past, nor it seems in the present, wanted to duplicate a service with the Friendship House.

"I think that Friendship House has done a great job with the service, the city has been supporting them since I think 2016 when it was first launched. You know we didn't want to duplicate services  so we supported their service which was also going to be a twice week service anyways, so I think it's good for us to continue supporting them.

And  then on top of that, we partnered with the North Coast Transition Society, and gave then a one time grant for the 24 Hour a Day, seven day a week program. Where people are fleeing abuse or trying to leave the community in a moment's notice they can actually call a number where they are able to get picked up and taken to the Transition House immediately.

So there's two levels  of service now when it come to that particular issue. One from the Transition House and now this service and if we can help them secure this funding, then I think that will help with this transportation link between Rupert and Terrace. So I think this is great news for the community and hopefully we get this grant secured  " -- Mayor Lee Brain on support for the Friendship House shuttle program

It would appear that the larger service, as is offered by the Northwest communities is one that would be well received and would serve to complement the work of the local agency.

And as Ms. Leclerc recounted back in 2017, the community to community engagement of 2016 that led the creation of the Transit shuttle found some of the largest turnout of participants in Prince Rupert.

In 2018, the Province took note of the success of the Highway 16 shuttle options from Terrace to Prince George and hailed the communities of the Northwest for their participation. 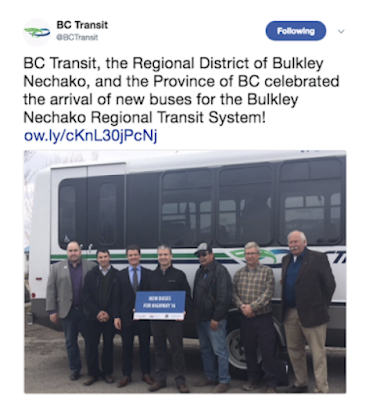 During Council's approval of the letter of support on Monday for Friendship House, Councillor Cunningham, was enthusiastic for their application for their twice a week service, though he incorrectly noted that it would be a twice a day program.

Mr. Cunningham also observed that there was a need for more transportation options between Terrace and Prince Rupert, stressing as he often has in the past of the growing number of medical patients requiring trips to Terrace, as well as  a range of other reasons for connectivity to the east.

"Well, we all know where I stand with medical appointments in Terrace and that, and this is just another great access to get to those appointments.

The Northern Health Bus, BC Travel services and things like that, don't provide enough service.

And this twice a day, definitely steps in and fills the void. So with the way the highway is and that and lack of transpiration for some people  to make medical appointments and that I think that this is definitely a great service. And I appreciate the Friendship House stepping up and doing it as well, I totally support it" -- Councillor Barry Cunningham

With money once again available through NDIT for communities to take up the opportunity to address transportation shortfalls, there does seem to be a solution as close as a grant application to address Mr. Cunningham's, or any other councillors concerns.

Yet Council somehow has managed to avoid discussing the BC Transit highway shuttle program since 2106, the topic never making it into a public council session for a review.

Perhaps with their comments on the need for better service still fresh in their minds, it may be time for a full discussion by the Council members for the public, as to why the rest of the Northwest seems to have the solution to the transportation challenges all wrong.

You can review the comments from the Council members related to the Friendship House plans as part of the City Council Video Archive starting at the seven minute mark.

More notes of interest from the Monday session can be reviewed from our Council Timeline, while a wider overview of past Council Discussion points is available here.

For further background on themes related to the highway 16 corridor see our archive page here.