As Greyhound makes its plans for an exit from Northern British Columbia at the end of this month, BC Transit is expanding what it has to offer for those communities in the Northwest that have signed on for the expanded Highway 16 service.

The project, part of the province's Highway 16 Transportation Action Plan currently runs from Terrace to Prince George, connecting those communities with each other and providing for one option for those with limited means to travel the region.

The service makes use of a combination of long and short haul connections and buses with a range of capacities to help to link the Highway 16 corridor.

Last week, the service that is in operation from Smithers to Prince George showcased a new, larger fleet of buses that is a response to the strong demand for the service since BC Transit introduced it.

As the new buses began to arrive in the region, BC Transit celebrated the upgrade to regional services for Burns Lake, Smithers and Prince George with a note on their twitter feed last week. 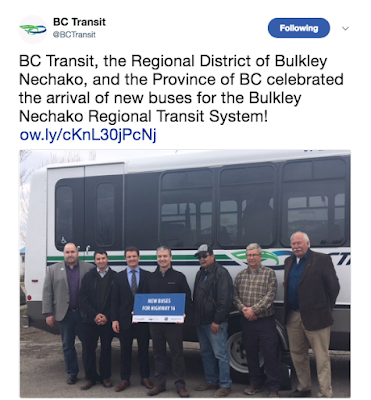 You can review the details related to last weeks announcement out of Smithers here.

To this point, the service which travels across Northwest British Columbia only reaches as far as Terrace, with Prince Rupert and the North Coast having opted for a different approach when it comes to providing for transportation options to points east.

The City of Prince Rupert and its regional partners decided back in 2016 to step back from involvement in the provincial led plan, to instead turn the transportation options for those looking for access out of town to the Transition House Society.

In addition to the services offered through the Transition Society's Park Avenue offices, the Friendship House on Fraser Street launched a highway shuttle service back in January, with a twice a week schedule on Tuesday's and Thursday's.

And while that was a welcome addition to the options available, a tour of social media contributions in the community would seem to indicate that the issue of the last link between Prince Rupert and the Province led program, is still something that many in the community would like to see their elected officials deliver to the North Coast.

Since that 2016 decision, City Council has not dedicated much of its time or interest towards the provincial project, other than through  a few comments when the Passenger Transportation Board made its announcement earlier this year to allow for the end of the Greyhound service.

For the most part, the topic of highway transportation has not made for much discussion during Council sessions and the City has conducted little in the way of consultation with residents of the city, to see if the current arrangement is meeting the larger need of reliable access to transportation as far as Prince George.

With the last Greyhound out of town set for the May 31st that topic may once again bring City Council back into the conversation, offering an opportunity for Council members to review if their approach from two and half years ago still fills the need that the community may be looking for.

More notes related to Transportation along the highway 16 corridor can be found on our archive page.
Posted by . at 10:10 AM

Email ThisBlogThis!Share to TwitterShare to FacebookShare to Pinterest
Labels: BC Transit expands capacity for Highway 16 service