The Recreation Department's plans for replacement of the Hot Tub at the Earl Mah Aquatic Centre got officially underway last Friday, with the City posting the Request For Bids to the BC Bid website.

Among some of the key elements of the project will be the complete demolition of the existing hot tub structure and adjacent pool deck surfaces, reconstruction of the pool structure as a completely new, formed concrete structure sitting on the existing pile caps and pile foundation.

As well the work will require the renewal of all mechanical and electrical requirements for the hydro pool operation as well as the relining of the pool and adjacent decks.

The Closing Date for the Request for Proposals is set for June 1st, along the way those interested in making a bid will be required to make a Mandatory site visit at the Aquatic Centre on May 14th.

The City intends to make a contract award by June 12th.

Once the contract has been awarded the timeline for the project would see the Aquatic Centre closed from July 2 until October 1st.

The Replacement program is based on a Report delivered to then Recreation Director Willa Thorpe,  the February of 2017 overview highlighted the situation facing the Aquatic Centre and the options that the city could choose to explore.

It's the second time that the city has put the project out for bid, having previously put out a call for bids last year, however the city put the project on the back burner shortly after that process had been initiated, deferring it for a year. 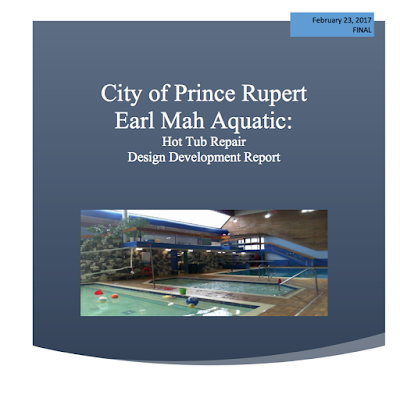 The City's new Director of Recreation and Community Services, David Geronazzo provided the overview of the Aquatic centre issues as part of a presentation to Council in January.

City Council discussed the topic at the January 29th session, moving forward with a plan to seek additional funding from the Northern Development Initiative Trust to put towards the project.

Council will make use of grant funding, operational funds and gas tax funds to put towards the replacement program. The cost towards replacement won't be finalized until the city gets a look at the bids that are submitted for the work ahead.

The project was also highlighted as part of the City's Financial Five Year plan presentation of March 2nd. 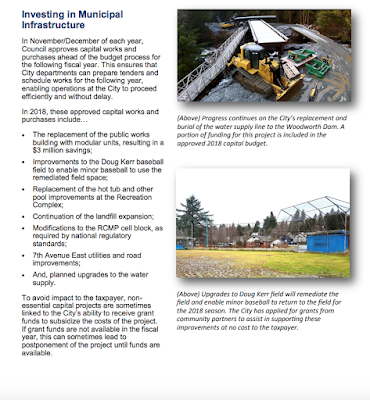 You can review the full scope of the project from the documents listed on the BC Bid site. 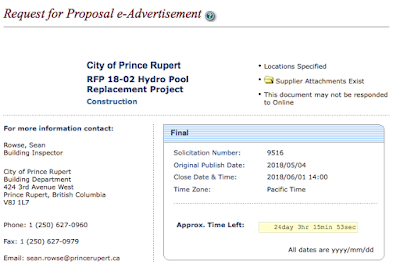 For more items of note related to the City's Major spending and infrastructure items see our archive page here, a wider overview of City Council Discussion topics can be found on our archive page.
Posted by . at 10:54 AM