"First Nations of B.C. are up to the challenge of speaking for themselves" -- MLA Ellis Ross speaks on theme of interventions from third party activists

The theme of LNG development, the Trans Mountain pipeline and other resource development in the province made for Monday's opening topic at the Legislature this week, with Skeena MLA Ellis Ross making note of the incursion of third party activists looking to advance their agendas through engagement with First Nation communities across the province.

As part of his commentary for the Legislature on Monday, the Skeena MLA took note of the call from many First Nations that they be allowed to talk for themselves, without having outside groups use them, as a way to further their own ambitions.

Mr. Ross observed of the perspective from some of the First Nations, delivered through a recent editorial from the First Nations LNG Alliance, that environmental activists are trying to control First Nations territories just as governments and corporations had done in the past,  using the same old divide and conquer tactics.

Leaders are first and foremost accountable to the people who elected them. Most Aboriginal leaders I know are far more concerned with trying to break a deeply entrenched cycle of poverty than fighting third-party activists. Many elected leaders and former leaders, like myself, view inclusion in the broader economy as a viable solution to their band members' issues, and that means support for the development of our resource industries, like LNG.

Karen Ogen-Toews, CEO of the First Nations LNG, also mentioned in her editorial how Crystal Smith, the current chief councillor of the Haisla First Nation, had to fend off an editorial by the Sierra Club recently. On January 24, Caitlyn Vernon, campaign director for the Sierra Club, wrote an editorial in the Times Colonist. The Sierra Club criticized the Premier's recent trip to Asia to promote LNG Canada, which wants to build an LNG export facility in Kitimat.

Mr. Ross, who as the former First Councillor for the Haisla has spoken often on the theme of third parties and their approach, recounted for the Legislature that Sierra club editorial observed how LNG development was not compatible with tourism, and how it was an interjection to the debate that the  current Chief Councillor address addressed with an invitation to the Sierra Club to travel to the Haisla territory to learn more about what the Haisla hope to achieve through LNG development. 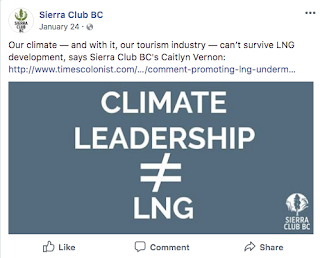 In response, Chief Councillor Crystal Smith had this to say: "Your editorial neglects to address any of the issues faced by First Nations in northern British Columbia, where unemployment is rampant, and the tourism industry offers little promise of that changing any time soon."

Chief Crystal Smith even went so far as to invite the Sierra Club to our territory to spend time with First Nations who support LNG. She concluded by saying: "We know exactly what we need: the ability to govern ourselves, take care of our families and ensure our young people have the kind of opportunities that allow them to remain in our community and become self-supporting."

I can assure you, Mr. Speaker, that First Nations of B.C. are up to the challenge of speaking for themselves. The general public is beginning to see through what Chief Ernie Crey of the Cheam First Nation calls a determined effort by environmental activists to use Aboriginals as pawns to advance their own agenda. I find it reassuring that the people of British Columbia recognize what third-party activists are trying to do to our province.

The current Chief Councillor of the Haisla Nation took the issue on with this response to the Sierra Club's editorial page submission, the response first relayed through the Haisla website

As part of the discussion on resource development, the latest notes on the Kitimat project also made for some of the morning overview, with Mr. Ross calling attention to the ongoing issue of steel duties and the impact that they may have on any large scale resource development plans in the province.

While it is laudable to protect jobs in Canada's steel industry, the capability does not exist in Canada to build these modules. There are only a few countries in the world with the expertise to build these modules. We are talking about very large components that could not be shipped overland and would have to be shipped overseas. A tariff would drive up the total capital cost by $40 billion in total and jeopardize the jobs of steelworkers in B.C. and Canada that would otherwise lose the work if LNG Canada does not go through.

We are now at the stage where a prime contractor has been named to design and build LNG Canada. I call on all members and all parties of this House to continue to support the LNG industry.

The Kitimat project continues to see forward momentum towards development, the most recent step to announce the prime contractors who will oversee development once the consortium behind the project gives the go ahead.

You can review more on the LNG industry in the Northwest from our archive page here.


For more items of interest related to the work of the Skeena MLA can be found from our archive page.

A wider overview of discussion themes from Victoria can be found as part of our Political blog D'Arcy McGee.
Posted by . at 9:11 AM