Mayor Lee Brain continued on with his Days of Pre Christmas messages on Wednesday. The Mayor outlining the most recent installment of what has been a week long festival of announcements and reviews of past notes.

This time with Mr. Brain providing a glimpse for his Facebook followers of the City's Plans for Eat Street.

The project one which will provide for a centralized food truck site located on Third Avenue West, located just down from the Belmont Hotel and on land adjacent to the rear of the Friendship House.

The Project was first noted by Operations Director Richard Pucci at a November Council session, when he offered up the then percolating sense of enthusiasm of the City towards the changing use of the property on Third West.

The Mayor's update for the holidays fills in a few more of the details of the project area and also serves to remind residents of the new designations for the city's downtown areas. 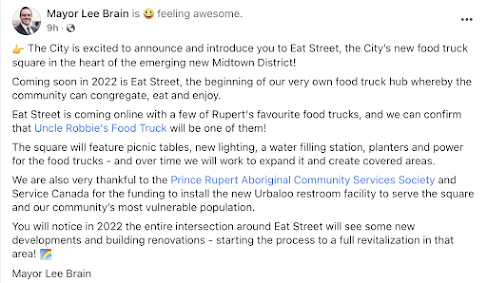 Also observed in the commentary from Mr. Brain is the installation of an Urbaloo on the site.

The public washroom facility, which has been a somewhat delayed addition to the area, will bring some much needed community public health items in the downtown region.

Those delays for the facility, served as some of the narrative for Mr. Pucci's November notes.

"The Eat Street Square, that is where there is a new Ubraloo washroom and we're going to be having some new food trucks that will be permanently housed there. We've had site delays obviously due to the storms and also some found fuel tanks that were on site We are just finishing up the ground prep to allow for that to be completed and to get some food trucks there so that we can have a great little vending spot" -- Operations Director Richard Pucci, speaking to City Council in November

While the Urbaloo made for some of the focus for the Wednesday update, Mayor Brain did not indicate when that new washroom facility will be open for the use of the community's most vulnerable members.

Further notes on some of City council's other plans for the community can be reviewed here.

More items of note on the Council year can be reviewed from our Council Discussion archive page here.