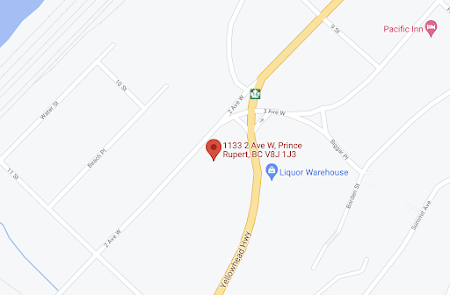 Members of Prince Rupert Fire Rescue and the RCMP are engaged in a major fire this evening, with crews and members responding to an apartment fire on Second Avenue West, just to the west of Five Corners.

Videos on Social Media from those near the scene show flames coming from the front of what is described as the Angus Apartments, with heavy smoke also coming from the scene on what is a bitterly cold evening in Prince Rupert. 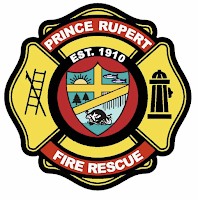 The building, a two storey walk up, with a number of units to the rear is located just adjacent to the old Sears location in the city.

The fire appears to have started just before 7 PM

The RCMP have blocked access to all routes leading to the immediate fire area as the efforts continue on the scene.

So far no details have been released by the PRFD or RCMP related to the incident.

More information as it becomes available.

Update: Fire appears to have extinguished as of 8 PM, no reports on injuries as of yet, with the residents having been relocated with family, friends or some local hotels for the time being.

Some on Social media have already launched a campaign to gather clothing and gift certificates for those impacted by the fire, those links can be found from the video link at the top of the page.

At 10:45 PM, Prince Rupert Mayor Lee Brain offered condolences to those who had lost their homes and outlined the background to the City's Emergency Social Services program, noting how the program works and how residents of Prince Rupert can assist. 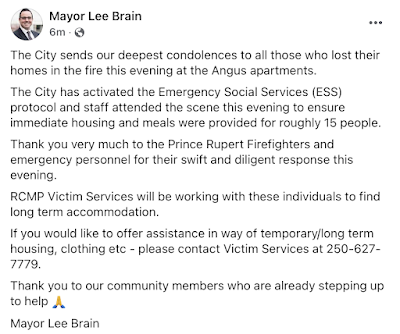 In the early hours of Wednesday, Prince Rupert Fire/Rescue provided an update on the fire and the welcome news that all occupants were accounted for from the incident.
As well, one firefighter sustained a hand injury and was assessed at the hospital.
The cause of the fire remains under investigation. 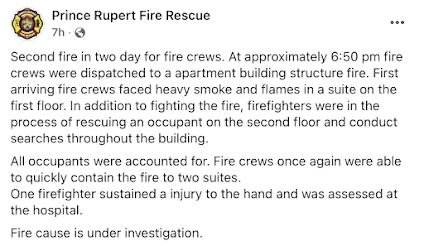 More notes on the work of Emergency Responders across the Northwest can be found from our archive page.