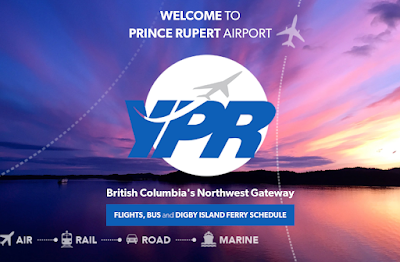 A short notice posted to the Prince Rupert Airport website calls attention to a scheduling change for flight operations in the early part of 2022, announcing the operation of an afternoon flight as of January 8th.

The information relay from YPR is rather vague, so we attempted to contact someone at the airport by way of email, to learn if this was an additional flight, or just a shift of flight operations from morning to afternoon, but so far we have not received a reply.
A bit of detective work on the Air Canada booking website, would seem to indicate that it's just a shift from morning to afternoon flights, with no additional flights planned out of YPR in the near future.

As part of our notes of yesterday for the airport,  we also made an inquiry about a Sunday travel situation which saw the Air Canada flight of the day make a U turn around Hartley Bay and head back to Vancouver.
Something which the YPR website, never one with much information at the best of times,  offers no details towards.
Though social media accounts in recent days have provided a narrative of a Sunday flight that had to return to Vancouver owing local operational themes in Prince Rupert.
As the Flight Aware archives note, this has been a challenging week for travellers to the many locations in the north out of Vancouver, with a number of delays for Prince Rupert bound flights among the scheduling issues during the unpredictable holiday period, where weather can make for more than a few changes to operational planning.
Our correspondence also made an enquiry towards the process of seeking out a new Airport Manager has had any success, if it's underway.
The Prince Rupert Airport's last manager Rick Leach left for Seattle in mid October.
Since that time, the City of Prince Rupert has not provided for much information on their plans for the Airport, or when they anticipate having a new Manager in place.
That seems to have resulted in a low profile for the Prince Rupert airport, the local air option one which was left out of a recent CFTK TV review of the state of air travel in the northwest.
Should we gain a reply to our correspondence, we'll update those files accordingly.
More notes on Air Transportation in the Northwest can be reviewed here.
Posted by . at 11:02 AM