The city's Police and Fire Departments got some attention as part of this weeks approvals for Capital Spending, with Council approving of some spending plans for the Prince Rupert Fire/Department while also observing on the ongoing work towards the new RCMP detachment for the community.

The new RCMP detachment, which is planned for property adjacent to the Court House at Third East and McBride did not make for any conversation from the Council membership, and for the most part its status was that of an information piece as part of the Capital Spending review towards the 30 million dollar capital project, with few other details on the planning revealed.

The year ahead seemingly destined for one of design and demolition of the existing Jehovah Witnesses Hall that is on the property.

When plan move forward, the funding for the New Detachment will come by way of Municipal borrowing. 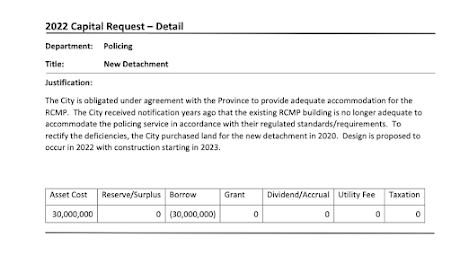 The Prince Rupert Fire/Rescue service will also see some momentum towards a new structure begin in 2022, with Council approving the Capital budget item towards design of a new Fire Hall, though few details related to a location or timeline towards a build was made note of from the Monday afternoon session.

Council also approved a new Reserve Pumper for the PRFD, as well as for the purchase of a Drying Cabinet and Modifications for the Department's Engine Five. 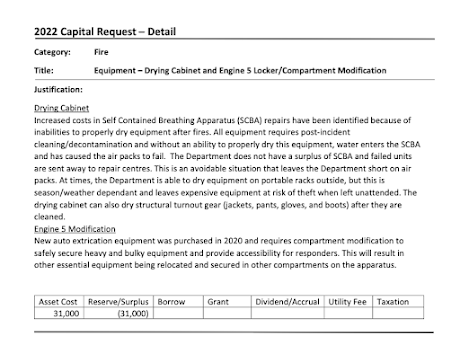 None of the Capital Requests resulted in any questions or inquires of the Fire Chief, or made for much in the way of discussion for Council members of City Staff as part of the review on the day.
The funding for the items for the PRFD will come by way of Surplus funds, grants, or short term financing through the Municipal Financing Authority.
More notes on the Monday Presentation can be reviewed here.
A wider overview of the work of the PRFD and other Emergency Responders is available here.