Arctic cold may soon break, but more snow is on the way

The Deep Freeze of Christmas is about to break, with a somewhat warming trend set to arrive on the North Coast by the weekend, but with the warming temperatures will seemingly come some snow, with this afternoon the first of two snowfalls to come in the next 72 hours.

We still have to contend with the Arctic Outflow Warning and it's wind chills for a few more days, but a respite arrives on Friday with a temperature high of one, with Saturday bringing the first above Zero temperatures in weeks. 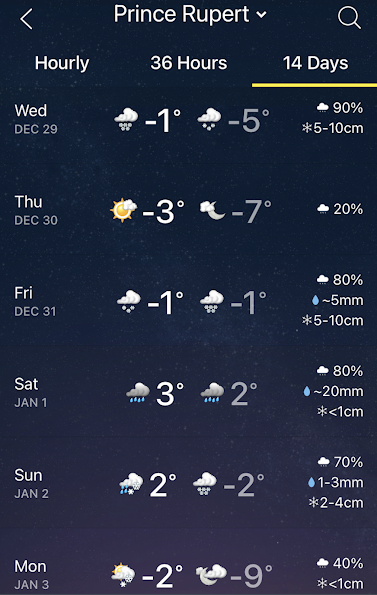 Of note is the arrival of rain for Saturday, something which may make for a bit of a mess and the need for some street level reconnaissance to locate the storm drains nearest your property to assist in the potential melt off for a few days.

The additional snow prior to New Year's will once again test the City's snow removal planning, with the potential for 20 cm by the midnight hour of New Years Day and the arrival of 2022, an additional amount of frozen precipitation to go with the volume that has fallen since mid December.

The City of Prince Rupert has not provided any form of an update on their snow removal work since December 22nd,  though the commentary on Social media would suggest some kind of a report on what their approach has been and what the future may hold would seem to be one that would be received well. 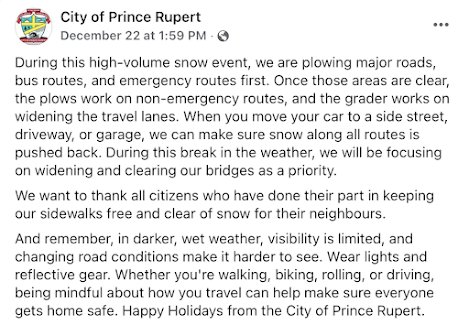 For many residents the snow effort isn't so much one of snow removal as it is snow redistribution, with snowbanks growing in size and roadways narrowing in scope.

With many Rupetittes seemingly more fond of Ford F-150's and Dodge RAMS over smaller compact or sub compact cars, in some places of the city it's to the point where traffic can only make for alternating transits in areas that are down to one lane.

In recent days, those watching the snow plows at work around the city may have noticed one from Storey's Contracting out on the streets; a bit of additional snow pushing power as the snow continued to accumulate, though its not clear if that was a call out for help from contractors or if the city's own equipment was on the sidelines and in need of repair.

The December snowfall will surely provide for one topic for City Councillors to take up when they return to their work in January and their first Council session of January 10th.

A first gathering for 2022 that perhaps will include an update from the Finance Office as to the hit on the city's snow budget from 2021, as well as some notes from the Operations Department towards some of the questions raised over the course of the last two weeks or so.

More notes on City Council themes can be explored here.

A review of our wild weather of late can be found from our Weather Archive page.