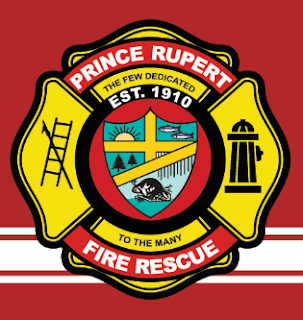 Tuesday night's fire at the Angus Apartments was just one of a number of calls for assistance over the holiday period for the city's Fire/Rescue Department, with a mix of medical, accident and Fire Calls making for an active period.

As we outlined on Tuesday evening, the PRFD was called out to the structure fire at the Angus Apartments in the evening hours, knocking down the fire within an hour during the course of a bitterly cold night.

An update on the incident from the PRFD, recounted the safe exit of the occupants of the building, as well as an injury to a member of the Fire Service. Residents are now with family, friends or in local hotels as part of the Emergency Social Service program in the city. 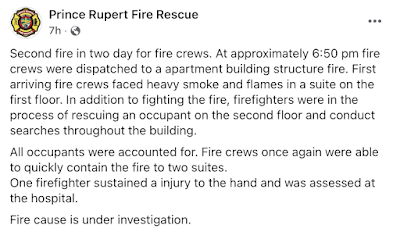 No cause for the Angus Apartments fire has been releases as of yet, the incident remains under investigation.

Prior to the Tuesday night response, the PRFD had just updated the community of their work on McKay Street on the West side of the city and a response from Monday and their work on a residential fire.

In their notes relayed through the PRFD Facebook page, the outline the scope of the fire response.

The Afternoon fire call on the residential structure was quickly contained to a single room, though the home itself sustained some and water damage.

The lone occupant of the home was in the residence at the time of the fire and escaped without injury.

Assisting the PRFD on the Monday fire, was the RCMP, BC Hydro and BC ambulance service.

No source of the fire was disclosed as part of the report.

With the colder weather of late, the dangers for renters and home owners can increase as they add space heaters to their homes to try to warm up, it's well worth exploring where you are plugging those items in so as not to overload your circuits, as well as to monitor those devices regularly to ensure that they are operating properly.

As the PRFD noted in their Monday notes, it's a timely Reminder to a residents to check their smoke alarms and practice home escape plans

More notes on the work of Emergency Responders in the Northwest can be explored here.