On both sides of the A/B line, the return of AMHS service to Prince Rupert has been well received

This weeks announcement that the Alaska Marine Highway System will resume its sailings to Prince Rupert has been welcomed from those on both sides of the BC/Alaska border, with community officials, residents and travellers all clearly happy to see the reconnect between the North Coast and Southeast Alaska set to take place when the end of June comes around.

Prince Rupert Mayor Lee Brain, has not had much to share on the topic in recent months, made a brief mention of the announcement through his Social Media stream on Monday.  The Mayor speaking to themes of collaboration across the border since the last sailing of October 2019. 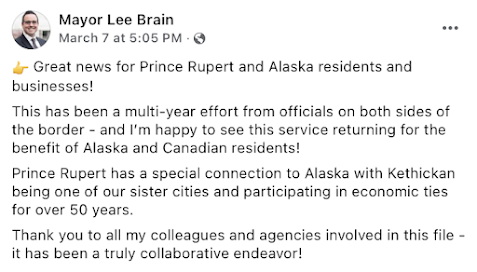 The Mayor's social media stream is also providing for a few views from area residents at word of the resumption for service. 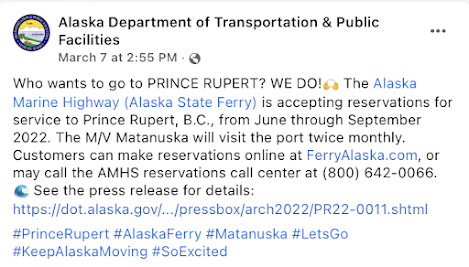 The Alaska Department of Transportation and Public Facilities social media feed has also found a positive response to the news, with over 30 comments delivered to this point to their update.

Though  a few contributors note of their desire for more frequent service that the twice a month schedule will provide to start with. 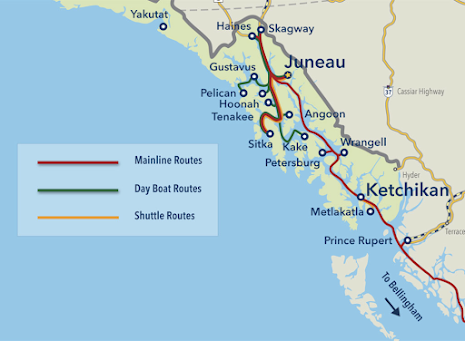 Alaska State Representative Dan Ortiz was one of a number of advocates for a return to service in the state, he also had comment on Monday with the announcement.

Though as he observed for Alaska Public Radio this week, he had he had been hoping for an earlier start date for the service resumption.

As we outlined on Monday, the Service will resume with a June 20th transit from Ketchikan to Prince Rupert, with twice a month sailings on the schedule through to September.

More notes on Marine transportation on the North Coast can be reviewed from our archive page.