The campaign for the Mayor's race has found three of the four candidates making for some increased social message making in recent days.

With campaign theme videos, vignettes from the streets and chat opportunities with the public among the themes for engagement in the quest for office.

For candidate Chrystopher Thompson, the weekend notes included notes of a meet and greet for Javadotcup and his work with the #ScrapthePortTax collective on Sunday. 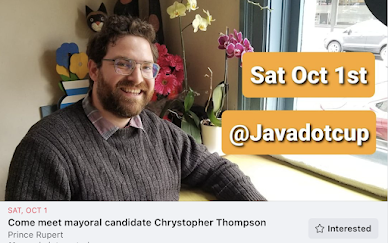 Herb Pond, by far is the most active candidate with a social messaging program.

His Facebook campaign providing for regular updates on a range of topics including some videos of the candidate speaking to issues, or in the video below, preparing his campaign material for door to door delivery over the next few days.

His most recent post howeve provides a glimpse into some of the unforeseen events that can occur on the campaign trail.

For candidate Jason Hoang, the weekend brought the debut of a new campaign video that sets a theme for his quest for office as the days countdown to the October 15th vote.

As for the campaign of candidate Stephen Fitzpatrick, he has little in the way of a Social media presentation, leaving the message making it would seem to his Electoral Forum presentations of one week ago.

More notes on the 2022 Municipal election campaign can be reviewed here.