PRMS Political Primer underway in lead up to Municipal Election

With the last Municipal vote of 2018 bringing in participation rates of just over 30 percent, the path towards better engagement in the future could come through education over the course of the lead up the 2022 Municipal election.

As part of their studies in recent weeks, students at Prince Rupert Middle School have been gaining some insight into our Democratic institutions, as well as an opportunity ahead next week to take the vote process out for a test drive.

As they have in previous election cycles of provincial or federal votes, the students have been taking part in an educational program called CIVIX, which provides some instruction towards the function of government.

The North Coast Review checked in with PRMS educator Mike McDowall for his Mike's notes on the project.

He observes that the program which is available in both English and French allows Teachers to decide which lessons to provide to students, with most of the lesson plans covering the importance of democracy and  levels of government. 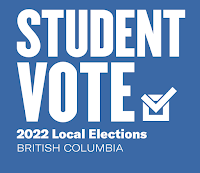 As part of the work students are tasked to investigate various candidates including those seeking positions on School Board as well as to how the voting process takes place.

The program is capped off with a vote by the students that takes place the day prior to the actual vote which in this instance will come up on October 14th.

The students will vote with essentially the same ballots that voters will receive featuring the names of the candidates, they also will vote behind a voter screen and place their decision into the ballot box.

When they return to class following the October 15th vote, they will then compare their decisions with those of the voters from the Saturday.

As part of the program, the students received a visit from Mayor Lee Brain today, Mr. Brain who will soon to be stepping down from his position following the October 15 vote, shared some notes on politics.

You can learn more about the Student Vote program from this information page.

With the introduction to democratic institutions for the Middle School Students,  it hopefully means that through the engagement of today, we will see an increase in the vote participate rate in the years ahead.

More notes on the 2022 Municipal campaign can be found from our archive page.