While the parent company Petronas prepares to meet with BC government officials on November 11th to hold further discussions on their proposed terminal site at Port Edward, a new issue has arisen related to the selection of the Lelu Island site for the proposed Pacific NorthWest LNG terminal.

On Wednesday, a group of four Northern Interior First Nations located upriver on the Skeena voiced their concerns regarding the massive industrial project proposed for the Port Edward area.

Members of the Gitxsan, Lake Babine,Wet'suwet'en and Gitanyow First Nations all gathered in Vancouver to outline their opposition to the project, highlighting the impact that they believe the proposed development will have on salmon stocks that transit through their territories. 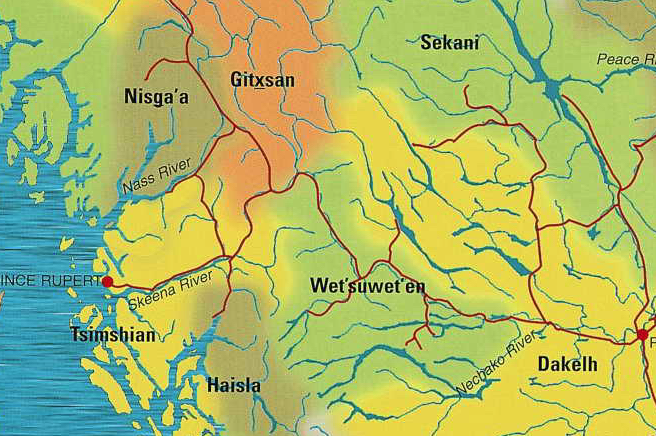 Citing what they describe as concrete scientific evidence to back their claims of concern towards the alteration or destruction of crucial habitat in the Lelu island estuary, the Four First nations called the plan for the Terminal on Lelu Island as ludicrous.

Outlining how no amount of mitigation related to the Lelu Island plan will be of satisfaction to them, suggesting that Pacific NorthWest LNG look for another site location in Prince Rupert for their terminal.

The Four First Nations had sought out bilateral consultations on the project during the current CEAA process, but say that they were refused, owing they suggest to the distance of their territory from the development site.

In a media release from Wednesday's conference in Vancouver, further background on their opposition was outlined, including the call for Petronas, as well as the Federal and Provincial Governments to withdraw from the Lelu Island site immediately.

Some of the media reviews from Tuesday's press conference can be found below:

For more items of interest related to the Pacific Northwest LNG project see our archive page here, for background on items of general interest on the LNG industry on the North Coast see that archive option here.
Posted by . at 9:21 AM