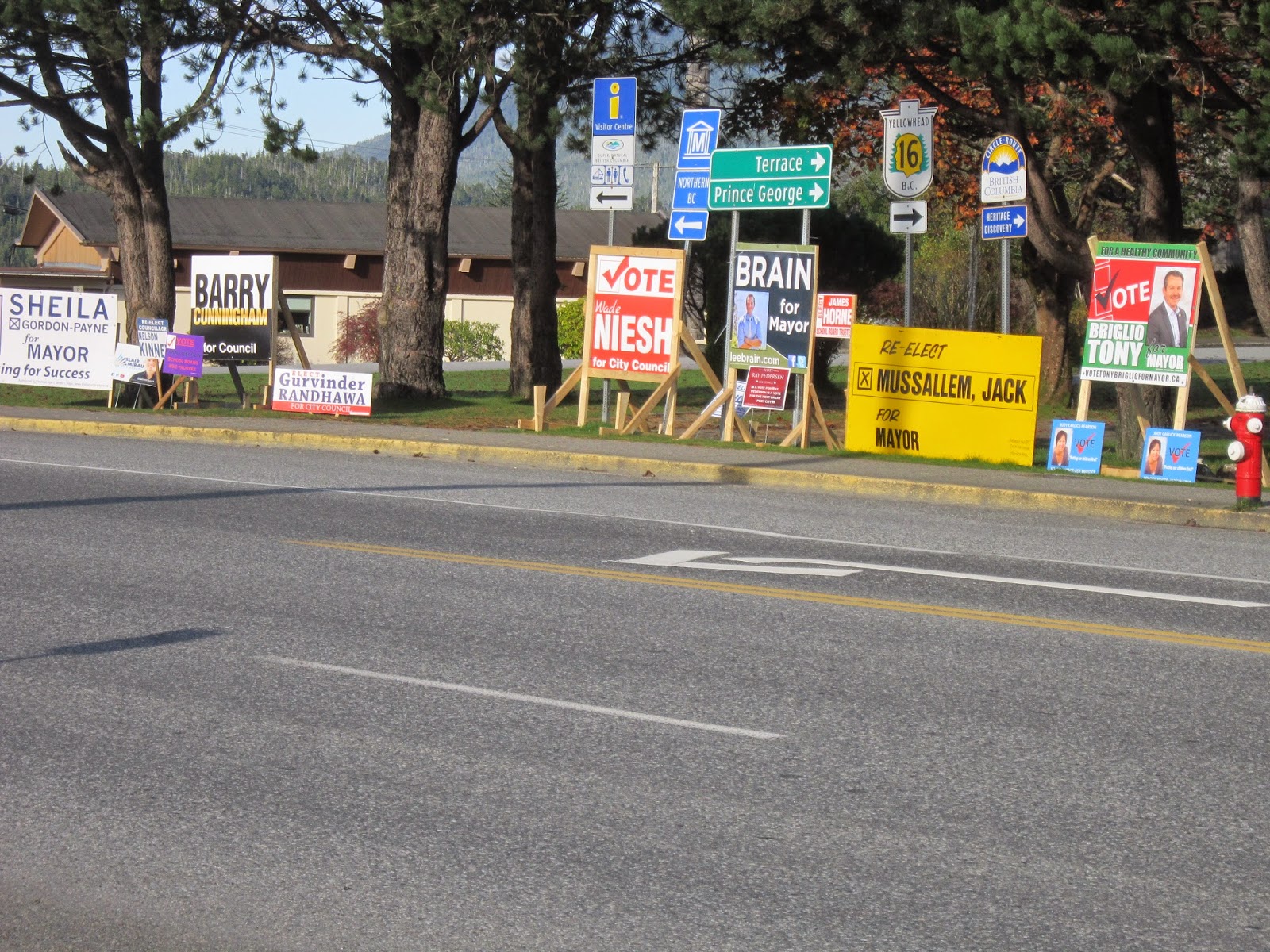 In just over 24 hours, Prince Rupert residents will perhaps get one of the few opportunities left to gauge the positions, platforms and observations of those seeking a spot as part of our Municipal Government.

Whether it's the race for the Mayoralty, a four way exchange that has seen candidates stake out some turf, or the quest for one of the six seats on Council, all of the candidates that are seeking your vote will be in one place at the same time, ready to take your questions.

For the incumbents tomorrow evening offers the chance to review some of their work over the last three years, a lengthy list of discussion points and policies to offer up as a record of their time at 3rd Avenue West.

For the challengers, tonight provides perhaps their best opportunity to take issue with some of those decisions and lay out their blue print as to where they would like to take the city,  when the next Council is sworn to office for a four year term.

The pressure of any election forum falls to the incumbents, as their record for the most part is there as the past narrative, the members of Council from 2011-2014 will no doubt look to shine the spotlight on some of their work on any number of files.

Whether it's their engagement on housing and social issues, the preparation work required for industrial development, or how they've weathered the challenges of the economic situation with limited revenue resources.

Another theme that might make for a good review on Tuesday night, the relationship between the City and the Prince Rupert Port Authority, a controversial topic that still seems a little strained as both sides offer up a difference of opinion on valuations of land within the city limits.

For the most part this Council has been very engaged in the conversation on Port and waterfront issues, with some very passionate opinions delivered by some of our elected representatives.

Something that many in attendance at the Lester Centre may wish for them to expand on.

There are some things however, that didn't quite have the same spotlight during the Open public portions of Council sessions this year and perhaps some of those topics might offer up some conversation subjects for tomorrow's forum as well.

While some on Council seem to believe that the close to twenty Closed Sessions of this year is just the way that democracy works.  The fact that very little comprehensive information from those in-camera sessions ever seems to get disclosed to the public, does seem to be providing residents with a bit of pause, particularly when it comes to what it is that Councillors talk about when the door is closed and the goals of municipal democracy are pursued.

Those perceptions on how the process of municipal government works from the current roster of Council members, might make for an interesting aspect of tomorrow night's Forum

There are some other items of recent months that may require a more expansive answer from the incumbents, potential issues which might tweak the interest of the voter as well, as we head to November 15th.

The City's process regarding Lot 444 and their Legacy Corporation still seems to be one of confusion,  a topic that Council could have been more engaged in when it came to providing information on.

Particularly when it comes to the nature of the Legacy Corporation and how it will work, who's involved, who's been hired and what the status of its work has been so far.

There would seem to still be a bit of work for the City staff, the Mayor and his Council to do there, when it comes to explaining just what it is that the Legacy Corporation is going to do for the residents  of the city.

Watson Island is another area which Council has seemed hesitant to wade into very much in public session, with only short snippets of information delivered on a sporadic basis, with large gaps of time in between those updates.

Alas, like any good thriller movie, the beast may yet live in the election campaign.

That data base from the Courts, shows an updated version of the information listed and available as of October 31st.

The results of the investment from the local observer on Watson Island issues, have been outlined on one of the city's social media sites (see here).

The reading appears to provide a fairly concise update on the progress of that case, providing what appears to be a useful account of the proceedings thus far.

Those attending the Tuesday night forum may be be wondering why the City seems to be less than enthusiastic when it comes to providing such items for public review information.

Especially when  such documents seem rather easy to acquire and in this case, can be found on a social media forum such as that offered by hackingthemainframe.

Information such as this, provided by a government information site is obviously not confidential and should probably be part of the information flow from the City to its residents.

If the city wants to keep the public informed on developments in the Watson Island situation, perhaps they should have paid the twelve dollars here and posted the information to their own website here, all in the spirit of transparency.

Regardless, the fact that the Watson Island issues remain unresolved to date and remain one of the long running stories of the region over the last decade, should make it a focus of the discussion as we head towards election day on November 15th.

And then there's the latest twist in the CityWest story, with last weeks surprise development of the City shifting some of their employees and a loyal retiree into Board positions with the communication company.

So far the only information provided regarding that move, came from the CityWest website, with the announcement of the new members.  Council which at times has been very vociferous on matters when it comes to CityWest, had nothing to outline last week regarding the moves and what the significance to the City they might represent.

Perhaps we'll learn more at tonight's City Council session, but regardless of what the incumbent Council may deliver in the final session of their term this evening.  When you consider the public interest in anything to do with the city owned communication company, the topic of CityWest might make for a fairly interesting discussion point at tomorrow's forum.

Considering the many issues that face the City and a desire to have a civic blue print in place to guide us through the next four years, Tuesday's forum should attract a wide audience both at the Lester Centre and through Cable 10 and the possible video stream planned by the CBC Daybreak North team.

For those looking to do a little bit of last minute cramming for tomorrow night's question and answer period, our archive of discussion points from City Council provides a good starting point to follow along with the work of Council over the last three years.

For more information on how the 2014 election campaign has gone thus far, see our archive page of election developments here.