A company once mentioned as an early proponent of LNG development for the North Coast has submitted a plan for a proposed mining operation on Smith Island, south of Port Edward.

Pacific Rim LNG, recently made application to the Province's Ministries of Lands and Forests and Natural Resource Operations, outlining its plans for the region. 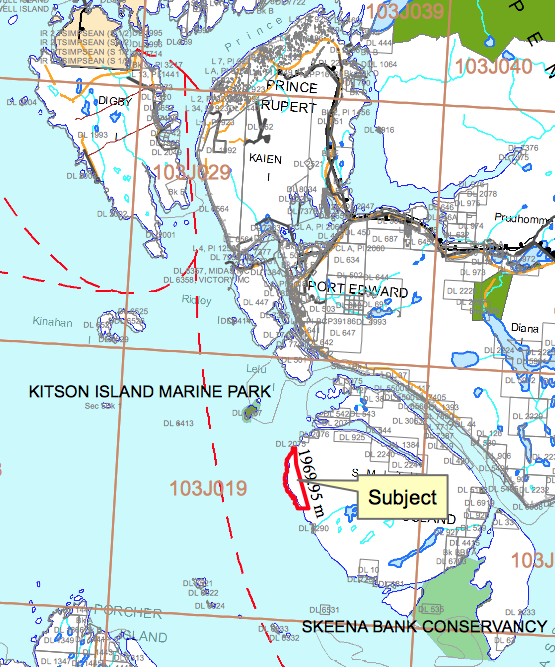 The project application would see the company seek Licence of Occupation for Light Industrial purposes on Crown Land located on the Island.

The nature of the mining operation would feature the development of a long term rock quarry development that would produce 200,000 tonnes of rock products per year, during the life of the project.

Product would be shipped out of the quarry site by barge, available for local infrastructure projects such as the container port expansion and/or any proposed LNG projects.

The original timeline had called for quarry operations to begin in 2014, though it would seem that may require some flexibility, heading as we are into 2015.

Pacific Rim advised that they had completed some preliminary field work on the site in January and February of this year. Still to come from the company will be a Project Review Application with the Department of Fisheries and Oceans.

However, according to documentation included in the application, the project is not required to undergo any CEAA review.

The full application for the Quarry project can be reviewed here.

The management plan for the proposed quarry development can be examined here.

Pacific Rim LNG first introduced itself to the region a number of years ago, offering up some interest for LNG terminal development near Prince Rupert or Kitimat, however in recent years not much has been heard about that particular proposal.

As interest in LNG development on the North Coast heated up over the last few years, the Pacific Rim proposal appears to have faded further from the pack. Whatever plans they may have once had, have not been mentioned in the same review of recent months of the more dominant projects that we have heard about.

The quarry proposal can also be reviewed in full from the Government of British Columbia Applications page, which outlines the status of the project to this point.

The deadline for comments regarding the Quarry proposal is Sunday, December 7th, 2014
Posted by . at 8:42 AM