Some areas of the North Coast may be a bit soggier than others depending on where an approaching weather system finally makes its landfall over the course of the next five days.

A major weather event could be in the making for the region with significant rainfall coming from the west, tracking at the moment just south of Prince Rupert.

Environment Canada issued what in effect is a pre-warning earlier this morning, outlining the nature of the approaching weather system, which will bring heavy rain and winds of up to 90 km/h.

The Weather Network went a little bit further puts the graphics department to work with a review of the approaching "Atmospheric River" below. 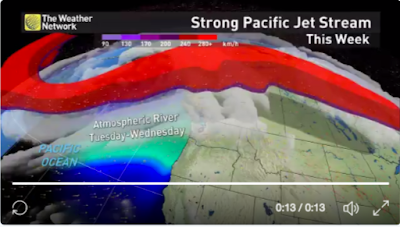 The Pacific front also gained some notice through the television network's forecast feature.

The Cumulative Rainfall Forecast seems to indicate that the majority of the precipitation seems destined for a corridor between the the southern end of Haida Gwaii and Port Hardy, which for the moment appears to be the likely storm track heading towards the Central Coast, bringing rainfall amounts to 100 mm plus before it has passed through.

You can follow the atmospheric river as it arrives on the coast from the Environment Canada Satellite Image feed here.

Updates to the official Environment Canada forecast will be available here.

We'll keep an eye on the brewing storm and once the national weather agency offers up its next weather statement we'll update our notes on the forecast ahead.

For more items related to weather events on the North Coast see our archive page here.
Posted by . at 9:13 AM

Email ThisBlogThis!Share to TwitterShare to FacebookShare to Pinterest
Labels: Strong weather system on way to North and Central coast