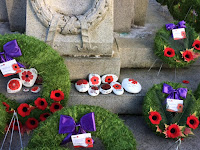 The poppy trays have started to appear across the city this week, the gentle nudge  for North Coast  residents to take some time to remember the fallen as Remembrance Day draws closer next month.

The Legion's Poppy campaign has been a part of the Canadian fabric since the first world war came to an end, expanded through the decades to include those who fought in the Second World War and  to recognize those who have worn a uniform of the nation's Armed Forces and RCMP.

It's main purpose to keep the memories of those who served this nation in mind over the years, while the financial contributions are put towards the care and support of the veterans and their families

The Royal Canadian Legion website has some interesting background on their work across Canada, as well as some notes on the Poppy campaign and its place as part of the Canadian remembrance.

You can also learn more about the history of Canada's military and our past battles and sacrifices, as well as the lead up to Remembrance Day through the Veterans Canada website.

As it has year after year, the November 11th ceremony of Remembrance will take place at the Prince Rupert Court House,  with the bell of remembrance to ring at the 11th hour, of the 11th day of the 11th month.

We will have more on the local observance as we get closer to November 11th.

Further notes on Community events in the region can be found on our archive page here.