With the 2016-17 KIJHL season one of a breakout year for former PRMHA talent Judd Repole, the Osoyoos Coyotes forward is quickly showing that this season might be even more impressive.

The play making forward with the Osoyoos team is off to a blazing start to the KIJHL campaign this year, having already amassed 14 points, leading the Coyotes in scoring with a goal and 13 assists into this weeks play.

As it was last year, it's Repole's skill as the set up man that is once again turning heads in the Okanagan, his passing plays finding their mark and propelling his line mates to the goal where reward has been found often.

Heading into his fifth year with the team, the 20 year old Prince Rupert forward has become a strong presence in the leadership group with the Coyotes and is set to help lead the team back into the KIJHL playoff hunt, a quest that came up one game short of being extended last season.

Part of that leadership role has been through taking part in a range of activities in the Osoyoos area as the season has gotten underway, with the Coyotes proving to be a popular group in the community. 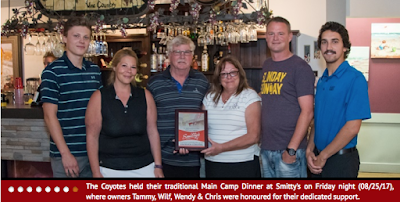 The Coyotes as a team are still trying to kick it into an upper gear, mired at a .500 record of 6-4-1 after 11 games of the season, their target over the next month will be to make up some ground on division leading Summerland, which stormed out of their opening game to secure a 10 and 3 record through the first month of play.

The Osoyoos squad will want to make the most of their two games in hand to regain some of the gap and set themselves up for the long road towards the playoffs of Spring.

You can keep up to date with the success of a number of Northwest players playing in leagues across BC and Canada from our archive page here.
Posted by . at 9:07 AM

Email ThisBlogThis!Share to TwitterShare to FacebookShare to Pinterest
Labels: Judd Repole off to hot start in Osoyoos