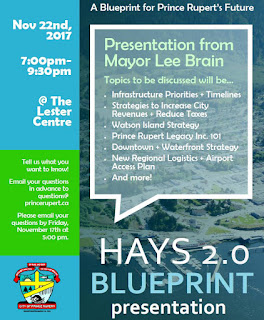 During the course of Monday's City Council session, Prince Rupert Mayor Lee Brain offered up a short snapshot of some upcoming community engagement plans that are heading the way of the community, including the latest notes on the City's Redesign Rupert initiative.

Mr. Brain also took some time at the end of the Council meeting to reveal the plans for an Open House on a number of municipal issues, as well as a for a special night to be set aside for he Mayor to provide a presentation on the path forward for his Hays 2.0 vision plan.

Towards that Hays 2.0 public meeting, the Mayor took to his Social media account on Facebook on Thursday with a bit more background on what residents of Prince Rupert can learn more about should they attend the November 22nd session at the Lester Centre.

Among the themes that the Mayor will present to the public for the night are:

A portion of the night is to be allocated towards an information session called Prince Rupert Legacy 101, which one imagines will provide some further detail on the city's vehicle for distributing revenues gained from the sale or lease of city land.

How the City made use of the Legacy Fun in 2016 is outlined in this report from the City website.

Other areas to be explored include the city's Downtown and Waterfront strategy, as well as a New Regional logistics and Airport Access plan.

There is also the promise of more topics to be added to the night's show bill before the house lights come up in late November.

The roll out of the Hays 2.0 session which is titled A Blueprint for Prince Rupert's Future, almost reads like the advertising for a one man show, coming to town for one night only. With the focus on the Mayor's presentation prominent in the poster and social media campaign for the event.

It's a bit of information delivery which might leave residents to wonder as to what function the rest of City Council members and those on city staff might have for the night.

And in the case of the six council members,  just how invested they may be in the far reaching blue print that the Mayor plans to share with the public.

That level of involvement is perhaps is something we may learn more about, when the November 22nd info session takes place from 7 to 9:30 PM.

The information campaign for the Hays 2.0 overview also notes that residents can email their questions to questions@princerupert.ca

The deadline to submit questions is Friday November 17th at 5 PM.

It's not clear from the initial stream of information provided, if the night will also include an open microphone session with those in attendance who may have questions as all the details for implementation of the Mayor's vision plan are introduced.

The Mayor shared his enthusiasm for the November session through his Facebook page on Thursday. 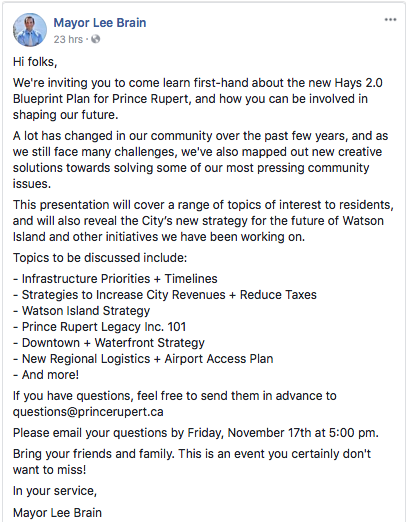 Some background on the original version of the Hays 2.0 initiative can be found on the city's website.

While other notes related to Hays 2.0 and other related projects from the City can be found on our archive page.
Posted by . at 2:06 PM

Email ThisBlogThis!Share to TwitterShare to FacebookShare to Pinterest
Labels: Mayor's presentation on Hays 2.0 in November