Councillor has high hopes for better relationship with Provincial government

Councillor Barry Cunningham all but popped on an I love the NDP button at Monday's Council session, providing for a pretty strong endorsement of the city's percolating relationship with the new government in Victoria.

The City councillor launched into somewhat of a partisan declaration on Monday, a political review that offered up a number of ways that he finds the new cabinet team assembled by Premier John Horgan to be preferable to the government that held office up until May.

The theme of relationships with the provincial  government came as part of Council's discussion on their struggles in resolving the affordable and supportive housing situation in the city.

Mr. Cunningham introduced the topic by following up on the Mayor's notes related to a meeting that the pair had attended with MLA Jennifer Rice in the week previous, with the Councillor noting how he is hoping for more progress with the new NDP government.

Among the threads of his commentary, he observes that Ms. Rice, is more than willing to knock on doors to help the community and how that in his view, he senses a different approach is at hand than that of the previous government.

"With the MLA now being on the government side, and she's more than willing to knock on doors and help us, we might get some results. The last government, you know it was all tied into LNG. If LNG happens you'll get this, you'll get that, it was like a carrot they kept dangling in front of us. This government here, seems to be, after talking to them, a little more perceptive about situations like this. You know, there's a human side to them, it's their first time in government so they're looking at it a bit different than a party that was in government for three terms and was getting kind of arrogant and thinking that they were untouchable" --- Councillor Cunningham on the theme of relations between the City and provincial governments.

The Councillor also observed that after city's delegation had productive engagements with provincial officials at UBCM in September, that he hopes that the ongoing relationship will deliver solutions and bring some light to the end of the tunnel.

The fulsome praise of the new partners in governance can be found as part of our Council Timeline Feature as well as from the city's video archive of Monday's council session starting at the one hour, fourteen minute mark.


Mr. Cunningham is not the first City Council member to hail the city's recent engagement with the NDP government as positive.

During the UBCM meetings in Vancouver both Mayor Lee Brain and Councillor Blair Mirau took to their social media portals to make note of the relationships that they had started to build with provincial officials during the conference. 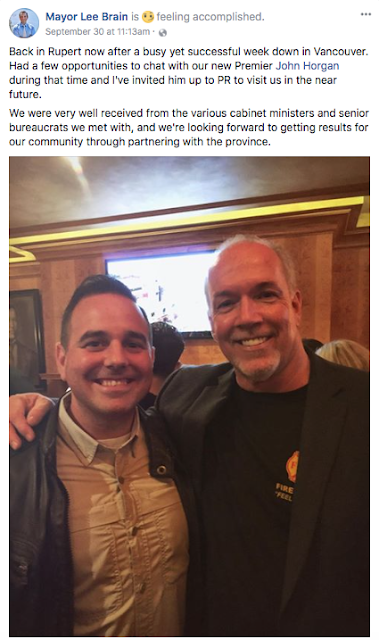 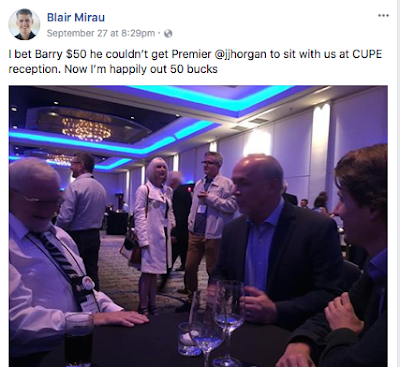 It might be a little early however, to declare a new era of cooperation and achievement just yet.

So far, when it comes to finding a solution for some of the larger issues of the region, there's been little progress seen from the new government, with many of the concerns of the last four years and beyond still outstanding.

As was noted yesterday in our notes on the most recent City Council session, the city's homeless issues and affordable housing concerns remain very much an active file, though there is little to be found in actual results considering all the discussions and stakeholder groups that are in play on those issues.

The School District is still waiting to hear if the NDP government will be any faster to action, than the previous one when it comes to the replacement for the Middle School in Prince Rupert.

And on the theme of Ferry Transportation, MLA Rice is counselling patience for residents of the North Coast and Haida Gwaii, most recently sharing her thoughts in a contribution piece in the weekly newspaper.

In her correspondence, which was a response to a previous item from Masset Councillor Bret Johnson, Ms. Rice offers up one of those clip and save quotes that we probably won't be seeing on the MLA"s Promises Made, Promises kept features in the near future.

The New Democrat government continues to work towards improving the ferry system, but I’m sure you realize that the government can’t solve all our problems immediately and make everything free.

Should there be no progress on any of the high profile files in the near future, one wonders if Councillor Cunningham will still find so many positive things to relay when it comes to his observations on provincial-municipal relations.

For more notes related to events out of Victoria see our archive page here.

A further review of the many issues of concern on the North Coast can be found on our Council Discussion archive page.

Email ThisBlogThis!Share to TwitterShare to FacebookShare to Pinterest
Labels: Cunningham on relations between the City and provincial government