There may be no more dedicated, though somewhat frustrated, listener base for CBC radio than those that are found on the North Coast.

They make for a collective that takes note of every day of programming and frequently calls attention, as they feel required, to some local deficiencies in the local approach to information programming.

The theme of local programming will get an extensive review in Prince Rupert over the next few days, when some of the local CBC listeners and advocates for public broadcasting take their case to Prince Rupert City Council on Monday evening, appearing as part of a delegation that will appear at Monday's Committee of the Whole session at City Hall.

The group has a number of talking points to bring to the attention of the City Council and the community at large, and as part of their presentation they will review some of the shortcomings that they have found in the delivery of news and information that resonates with the North Coast, as well as to offer up a few solutions for consideration by the CBC executives in Vancouver.

In a bit of a preview of their notes for Monday that is posted to the Agenda for the Monday Committee session, the group outline their concerns over some of the facets of what the CBC call 'local programming" and how they feel the national broadcaster might be out of step a bit with northern communities.

The local group is led by Kathleen Palm, who has picked up the torch for public broadcasting in the region from long time advocate Evelyn Bassso.

Ms. Basso a former Prince Rupert City Councillor, has long been watchful when it comes to public broadcasting in the region and has been dedicated over the years to raising issues related to the local operations and in the past has raised the alarm, along with some sharp observations, whenever service has been threatened to the region.

When Ms. Palm and Ms. Basso sit down in front of Council on Monday, they may offer up the observation that it's time to make progress with Radio One and to make the CBC a source of Northwest news, and entertainment and with content of interest to the rest of Canada.

The local group will introduce four points on Monday for the community to take note of, calling again for the city council to remain vigilant when it comes to any potential for erosion of service in the community.

Municipalities may offer feedback regarding the emergency broadcasting during the fire season. What has been the value of CBC to citizens of the B.C. Interior during this tumultuous summer?

The Board of Directors must support the reinstatement of journalists 140 jobs were lost most recently nationally and it is my sense that because of our advocacy, of the 25 jobs gone in B.C., none were in Rupert or Prince George. Besides the excessive flood of U.S. news, CBC news consists primarily of crime reports. Real journalists are needed to explain our country to us. Bring them back.

When CBC One announcers put out a call for story ideas or news items, town, villages and settlements need to know how to contact CBC so their community voice is heard. CBC can take collect calls and they also accept calls from rotary telephones, mail and of course, social media.

The next job position on "Daybreak North" should be placed in Prince Rupert. Online research may be done as well from Rupert as from Prince George. An extra position will make even more unlikely the situation where there is no one broadcasting from Rupert.

You can gain a sense of some of the story lines from the Daybreak North programming from their archive of stories for the week available on their website here.

You can review the full report from the Committee of the Whole Agenda package here, and then tune into to the City Council session Monday night at 7PM for the presentation to Council and for any feedback towards it from Mayor Lee Brain and the members of council.

The CBC responded to some of the local concerns two years ago, delivering a letter to Prince Rupert City Council at the time that reviewed some of the notes that had been raised by local listeners.

That letter to the city came after Ms. Palm and her group brought their concerns to the attention of the city in May of 2015.

Now two years later, it seems a report card might be in the works, as the local group hosts an event tomorrow at the Prince Rupert Library, where local CBC listeners and those concerned about public broadcasting will review their progress towards building on the CBC presence in the Northwest.

The meeting offers up an opportunity for listeners of the public broadcaster to  share some thoughts and develop their plan further to seek a larger North Coast presence on the regional broadcast. 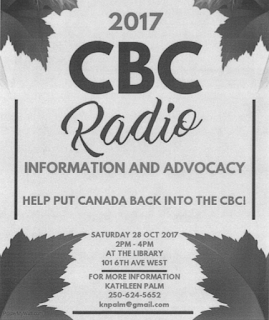 That Information and Advocacy event takes place from 2 to 4 PM at the Library on Sixth Avenue West at McBride.

You can review more of the Northwest media scene from our archive page here.
Posted by . at 11:03 AM