Prince Rupert's Brett Fudger was the talk of Prince George this weekend after the PRMHA alumnus lit up the scoreboard in a BC Major Midget Hockey match up at Prince George's Kin 1 arena.

The 16 year old rookie with the Cariboo Cougars netted three goals and picked up an assist as the Cougars knocked off the visiting North Island Silvertips by scores of 10-2 and 6-2.

The weekend burst added to Fudger's growing totals for the Cougars, with the Rupertite having scored six points in his first eight games.

The quick start for the Prince Rupert forward finds him fourth overall in Cougar scoring with 3 goals and 3 assists for 6 points after eight games of the new season.


The Cougars are currently holding down fourth place in the BC Major Midget League, the eleven team circuit that serves as a significant feeder system for both Junior A and University hockey. The Cariboo Cougars are the defending champions, looking to make it a repeat when next Spring rolls around. 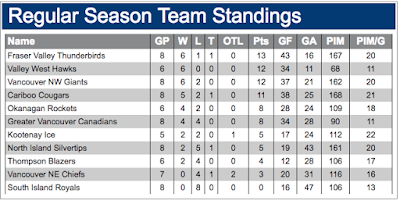 Those wishing to check in from time to time on the progress on the former Prince Rupert minor hockey player can access BC Major Midget games online through a pay per view portal which not only features live action, but archives of past games.

Fudger's pace has propelled him into the spotlight with a number of Prince George news sources, with the weekend's work earning him a number of reviews.

Email ThisBlogThis!Share to TwitterShare to FacebookShare to Pinterest
Labels: Hot start for Brett Fudger in PG