Part of Port Edward without power owing to slide

BC Hydro is working to return power to a portion of the District of Port Edward with the utility noting that the disruption is due to either a mud or snow slide in the area. 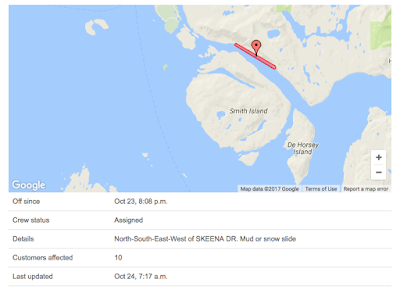 The notice is posted to the BC Hydro website and notes that the incident was first reported at 8 PM on Monday evening, no time is estimated for the return of power to the affected residents who are on Skeena Drive in the area across from Smith Island.

The Port Edward outage is one of a number of issues that BC Hydro is working on across Northwest British Columbia this morning.

Further outages most likely can be expected as the second hit of the Pacific front approaching the North Coast arrives later today.

Our notes on past outages can be found here.

Email ThisBlogThis!Share to TwitterShare to FacebookShare to Pinterest
Labels: Power outage in Port Edward as part of storm event