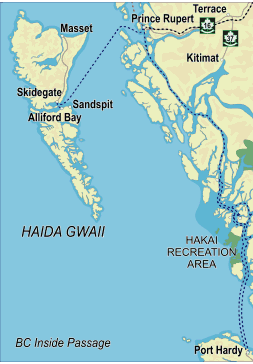 The River Forecast Centre has maintained a number of Warnings and advisories for communities around the North Coast, Haida Gwaii and Northwest as we head into Tuesday afternoon, among the notices are:

The full overview of the advisories can be reviewed here.

The warning comes as Environment Canada reminds residents of the region of the Heavy Rainfall Warning still in effect on the coast and points inland.

The weather service is calling for an additional 75 mm of precipitation once the system comes ashore, that's anticipated to come later this afternoon, with the latest cycle of weather to remain with us into the evening.

As the province updates its Advisories for the region, the City of Prince Rupert continues to make note of local issues such as high tides and the amount of anticipated precipitation through a notice posted to the City website, though no update to that advisory has been posted since last evening.

For more items related to weather events across the Northwest see our archive page here.
Posted by . at 1:51 PM