Prince Rupert was one of a number of destination points on the political map this weekend, in addition to a tour of the Northwest from NDP Premier John Horgan, two of the candidates in the Liberal leadership campaign brought their tours of the region in the city on Saturday and Sunday.

The first of the Liberal candidates to arrive in town was Todd Stone, who hosted a meet and greet at La Gondola on Saturday, where he brought his themes of economic development to the gathering of local Liberals. 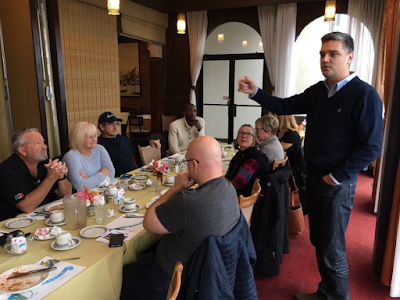 He also took to his social media streams during the visit, using the Atlin Dock as his backdrop for one of a number of social media features, the former Transportation Minister noted of the potential for the North Coast and making note of the Premier Horgan's tour of the region, called attention to the need to develop more industry on the North Coast .

Mr. Stone's appearance in town marked the wrap up to an extensive tour of Northern BC which took him from Prince George to the North Coast over a period of 48 hours.

Former Surrey Mayor and Federal MP Dianne Watts hosted a breakfast function on Sunday, inviting early risers to Java Dot Cup for coffee and muffins, as well as a chance to ask her questions or share some thoughts about the future of the BC Liberals and the province. 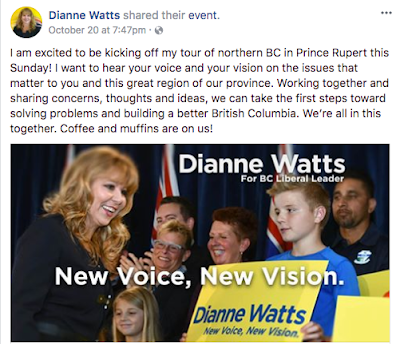 Ms.Watts was in Terrace later in the day, with the tour moving further inland today with stops in New Hazelton and Smithers.

You can catch up to some of the themes of the various leadership campaigns through our Leadership tracker feature on our political portal D'Arcy McGee.
Posted by . at 8:56 AM

Email ThisBlogThis!Share to TwitterShare to FacebookShare to Pinterest
Labels: Liberal leadership candidates in the Northwest