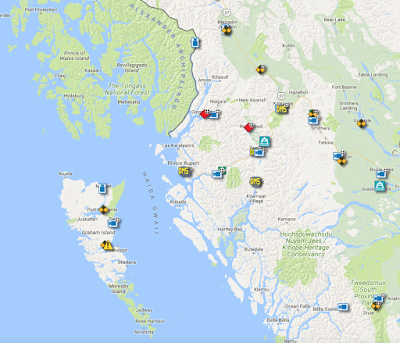 The first significant storm of the fall season has come and gone, it's one two punch leaving much of the Northwest soggy and in some areas with some lasting effects that need to be addressed.

For those travelling eastbound from Prince Rupert, travel to a number of communities will come with a number of advisories to be aware of as flooded roads and washouts dot the landscape in many areas of the Northwest.

As we noted Tuesday evening, at one point Highway 16 between Terrace and Prince Rupert had been closed due to flooding, by 7PM the Ministry of Highways had managed to secure the location of the flooding 40 kilometres west of Terrace and provided for one lane alternating traffic.

That however was just the start of the work ahead for responding crews both on the highway and in municipal areas.

A look at the Drive BC map for today provides the key areas of note for those travelling today.

Reports out of Kitimat have work underway to address flooding conditions on the Kitamaat Village Road and crews are also attending to a washout on Highway 37 near Lakelse Lake.

In the Terrace area, residents of New Remo have been evacuated due to the high water levels.

To the North, the Nisga'a highway has also been closed due to flooding.

Over on Haida Gwaii, mudslides and pooling water have been the main issues, along with a developing situation related to the water treatment plant at Skidegate.

You can take note of the latest updates to the road conditions across the region from the Drive BC website and twitter feed.

Some notes to this point on the weather related issues can be found below:

More items on past weather events for the Northwest can be found on our archive page.

Update: Wednesday morning the Emergency Support Services for the Regional District of Kitimat-Stikine declared a State of Emergency