Prince Rupert basketball fans will be watching the standings with a bit more interest this University season, making note of the roster for the Men's basketball program at the University of Northern British Columbia which hosts a Charles Hays grad in the line up once again, with Klyer Eckess ready to take to the court with his T-Wolve team mantes in a quest for a national championship.

Eckess, a five foot nine guard, transferred to UNBC last year from Thompson Rivers University, he began to gain notice in the T-Wolves camp as 2016-17 progressed and will be looking to earn some additional court time this season, that as the team prepares for the 2017-18 tip off tonight at the Northern Sport Centre in Prince George.

Tonight's opener, marks the first of two games against the Dinos this weekend with game two of the series set for Saturday night.

The second year in the T-Wolves line up, provides the Prince Rupert baller  a chance to measure himself against some of the elite in university basketball in Canada. 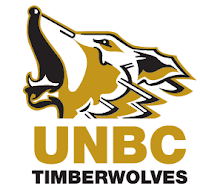 The task tonight for the T-Wolves will be challenging, with the University of Calgary Dinos in town.

The Calgarians are traditionally one of the top tier teams in University ball, found regularly atop the listings of the U Sports Canada West Conference and a team that has made frequent trips to the championship round in years past.

UNBC has ambitions for a playoff position once the lengthy University season comes to an end in March, the road to the finals will at some point pass through Calgary one imagines, this weekend the T-Wolves can send a message to the Dinos that they're coming.

The opening schedule for UNBC will certainly give head coach Todd Jordan a good understanding of his teams strengths and weaknesses, in addition to this weekend's visit by Calgary, the T-Wolves are heading off to Vancouver next week for games with the defending Canada West champion Thunderbirds.

T-Wolves games and other U Sports matchups are streamcast on a pay per view portal, you can get more information on how to subscribe here.

A preview of tonights game can be found below:

As we have in past years, we'll be tracking the success of those former Rupertites as they take to their new challenges in University sports, you can follow their progress from our archive page here.
Posted by . at 11:53 AM