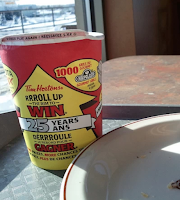 When company officials at Tim Horton's roll up their rims, the message will be stark and perhaps a little bit shocking, with You Are Not a Winner the theme rather than the more familiar play again, though the folks at Timmie's will no doubt hope that customers weigh in again when it comes to their favourite coffee stop for the day.

For now, the once most desired cup of Java from the national chain has been dropped significantly lower in the listings, that according a survey conducted by Maclean''s magazine.

In an item that is sparking debate across the nation, the findings from the Maclean's survey have crowned McDonald's as the most desired cup of Joe, with the Tim Horton's now found in fourth place, chasing the Second Cup chain and Starbucks and holding off the tandem of Van Houtte/A&W who are sipping at their heels.

The findings might suggest that some of Tim Horton's Public relations woes and the fact it's no longer a Canadian company (owned by a Brazilian restaurant group) are having a bit of an impact on the image of the once iconic Canadian brand. 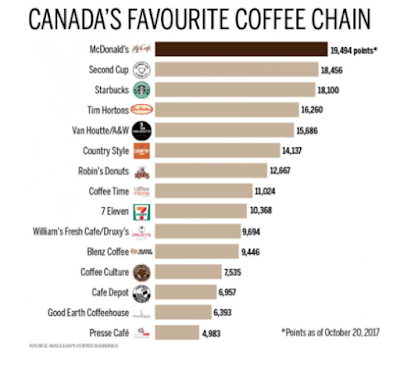 Such has been the interest in the coffee reviews, that Paul Well's the chief columnist for the national news magazine noted that Canadians are apparently very passionate in their quest for the right cup of coffee.

The full review of the survey can be found here.

And as it's an ongoing project, you can participate by taking the survey here.

The results from Maclean's are national in nature, for a more local perspective, some lengthy, in the field research will be required for Prince Rupert.

A place where the battle for the taste buds on the North Coast includes not only the barista stylings of Tim Horton's, McDonald's, 7-11 and Starbucks, but a number of locally owned options that are quite popular with coffee seeking Ruptertites.

Such a survey deserves some extensive research, with a fair bit of time required, along with a strong bladder, before anyone is able to compile any definitive results for the North Coast.
Posted by . at 8:46 AM