A proposal from Green Party Leader Andrew Weaver to shift the electoral process towards a proportional representation system is currently under review and the focus of discussion at the British Columbia Legislature.

The provincial government introduced the motion, part of the Confidence and Supply agreement with the BC Green Party back on October 4th.

Known as Bill 6, the Electoral Reform Act , a short overview of the proposal can be found here.

Background notes on the proposed act are also available from that notice, the key element to it noted below:

The Referendum process that is noted as part of the reform plans reads as follows: 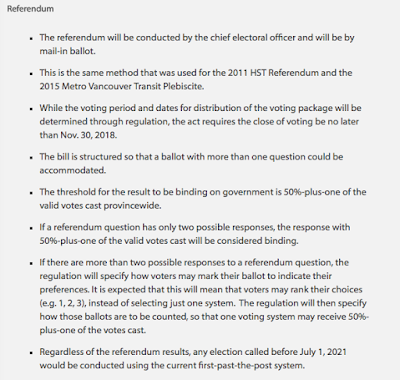 The Green party caucus outlined their support for the government's bill shortly after Attorney General David Eby relayed the background to it.

Since that time, the topic of the proposed legislation and how the government plans to implement it has made for some strong debate in the Legislature.

For the most part, the Liberals are of one mind when it comes to their opposition to the motion and one MLA who has a number of concerns about the impact of that shift in the electoral process is MLA Ellis Ross of Skeena, who took up the discussion during the Wednesday afternoon proceeding in the House.

Opening his notes on how his job is to represent all of the residents of Skeena and then determine if any legislation that is proposed is good or bad for those that he represents and to call attention to those plans that may have a detrimental impact on the Skeena region.

That narrative is what brought the MLA to Bill 6,  legislation that the MLA calls a deeply flawed attempt to hijack the democratic process.

Among some of the highlights of the many areas of note flagged by the Skeena MLA are:

The flaws of a quick movement towards proportional representation, without much in the way of engagement to hear the thoughts of British Columbians:

It is flawed because at its core, this bill is hollow and devoid of any real substance on electoral reform. Instead, this legislation is the product of a hasty and ill-thought-out process. But before I even touch on the substance of electoral reform or even the topic of proportional representation, I want to draw your attention to the fact that this bill was borne out of a hastily arranged agreement between two political parties in this legislature, more commonly known as the NDP and Green Party coalition.

The confidence and supply agreement was signed on May 30, just 21 days following the provincial election. For those who haven't examined that document in any great deal detail, I would draw your attention to section 3, entitled "Policy Initiatives". Part (b) spells out how a New Democratic Party and Green Party government would hold a referendum on something called proportional representation.

The fact that both partners had to bicker over whether or not to hold the referendum in the first place is quite telling. Because, according to the leader of the Green Party, there was no need for a referendum at all. On May 10, just one day after the provincial election, the Green Party leader declared on Global News: "In our platform, we said we would introduce proportional representation, and if we were to have a referendum, it would be after the fact."

I'm not quite sure what the purpose of holding a referendum after the fact would be. It's kind of like finishing your meal at a restaurant and then telling the waiter you've changed your mind about the order. But a mere 12 days before the Green Party tied themselves to the NDP, the leader of the Green Party stated quite clearly his position again, during an interview with Canadian Press."Our position had been that we would bring in proportional representation without a referendum, but we would be open to discussing a referendum afterwards."

The nature of the process and how it will redraw the political map of the province:

What this bill represents to the Green Party is a carrot on a stick, and that's part of why this bill is fundamentally flawed. This piece of legislation is not designed to serve the interests of British Columbians. It is aimed directly at preserving a power-sharing agreement between the NDP the Green Party. In other words, the NDP is telling the Green Party that you have to get into bed and stay in bed for at least the next 4½ years.

This bill is also hollow because it doesn't even contain a hint of what the referendum question would be or how proportional representation would redraw the political map of the province. What this bill does set forth is an empty process with details to be determined sometime in the future by the NDP and the Green Party behind closed doors.

As an elected representative and as a lawmaker for this province, I find that unacceptable. We have a minority government desperate to cling on to power that answers only to the Green Party. Instead of holding a proper vote that would change our entire democratic system, the matter will be determined through a mail-in ballot.

The government wants to bring B.C.'s democratic institution into the 21st century using snail mail. Sometime next fall, you're going to be at work, hopefully, and the government is going to slip an envelope through your door. Along with all of the other junk mail and flyers, there will be an envelope asking you to rig the next election in favour of the NDP and the Green Party, and that is unacceptable.

Concerns over how proportional representation could lead to political gridlock and further the divide between rural and urban BC.

I'm going to try to do my best to describe what proportional representation is and how it would change the electoral map in British Columbia. Proportional representation is a system in which parties gain seats in proportion to the numbers of votes cast. Put simply, if 60 percent of voters vote for a political party, they would control 60 percent of the votes in the Legislature. In order to achieve this, our government system of electing a representative from each constituency would be eliminated, along with local representation. It would do away with the single-member constituencies that we currently have.

For example, the people of my riding of Skeena would no longer elect a representative. Their votes would be cast in a pool instead. If there were ten parties, the Legislature would be based on the number of votes cast for each party. Proponents of proportional representation claim it's better because each vote somehow counts even more.

In actual fact, proportional representation tends to favour smaller parties. For example, if ten parties compete in an election and the party that gets the least votes achieves the support of 10 percent of the voters, they represent 10 percent of the Legislature. However, opponents of proportional representation argue that this system tends to lead to gridlock.

The impact on the Northwest and other rural areas from the adoption of a proportional representation system:

From a rural and northern perspective, the loss of regional representation would have devastating consequences. There would be no longer a representative from Skeena, Peace River North or Prince George–Valemount. Due to a smaller population, we would be overwhelmed by the voting power of the Lower Mainland  which would have devastating consequences.

As a matter of fact, Metro Vancouver, with a population of almost 2½ million people, would dictate the composition of the Legislature. They represent more than half of the population and would dominate the number of seats. This would create a further gap between urban and rural British Columbia.

How the proportional system will reduce the Legislature to a deal making arena:

Proportional representation combined with two-member parties will turn in Legislature into a deal-making arena, with a number of fringe parties waiting to be seduced or courted by other parties who create power. This deal-making, shown by other countries in Europe who have proportional representation, will make this Legislature dysfunctional and inoperable. We don't need a made-in-Europe solution.

This type of scenario, to me, can only be described as self-serving and not serving the people of British Columbia. The parties, and by default this Legislature, wasn't meant to serve politicians elected to this House. It was meant to serve all the citizens of British Columbia. Our democratic system serves a vital function. It is to elect a representative government.

Electoral reform should be left up to the people. It is not the government's role to decide how an electorate should vote. So on behalf of my constituents of Skeena, I will be voting to retain rural representation. I will be voting to preserve democratic values. I will stand up for northern and rural British Columbia, and that means I will be voting down a deeply flawed piece of legislation like this.


The full transcript of his statements to the House, which are well worth exploring, as well as a follow up presentation from Mr. Weaver of the Greens can be reviewed as part of the archive of Wednesday session starting at the 5 hour 19 minute mark.

The theme is also available for review through Legislature Video Archive, view the Chamber Session for Wednesday, Mr. Ross's thoughts on the topic begin  at the 5 hour 19 minute point.

The topic of proportional representation has also made for some discussion beyond the Legislature, with many of the province's news services and columnists offering up some observations on the theme.


More items of interest related to the work of the Skeena MLA in Victoria can be found on our archive page here.

A larger overview of developments out of Victoria can be reviewed through our political portal D'Arcy McGee.