Local environmentalists are expressing a bit of alarm over what appears to be some vegetation control that has taken place along the CN Rail line across Northwest British Columbia, with particular focus on the portion of the railway line that runs along the Skeena River and the creeks that feed into.

Members of the T Buck Suzuki Organization raised their concerns late last week, posting a number of photos to their social media stream, raising their alarm over what they view has been improper application of herbicide along the Northwest corridor between Terrace and Prince Rupert.

The main concern for the group is the impact of the spraying of what they believe to be herbicide might have on the river and creeks that feed into the Skeena and potential issues related to the health of salmon that transit those waters.

The organization offered up its observations and photos through its Facebook page on October 11th, an entry which has sparked much discussion from those that have read it so far, with some observing that the claims might be considered somewhat sensational in nature and require more investigation.

According to media reports, the province's Ministry of Environment is reviewing the claims and ministry staff have been said to have visited some of the locations to assess the situation. 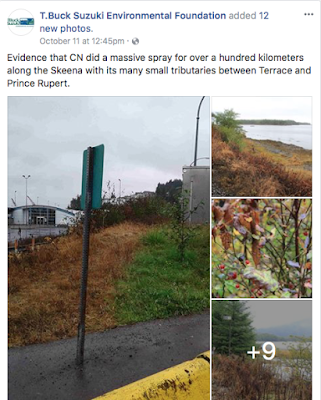 CN Rail has not to this point posted any information related to the vegetation control concerns through their website or any of their public information portals of Facebook or twitter.

The story was first picked up locally by CFTK TV's Corey Callaghan on Friday, followed by a CBC radio report over the weekend, those notes and others than may follow can be reviewed below:

More note related to CN Rail's operations in Northwest BC can be found on our archive page
Posted by . at 8:51 AM