BC Liberal leadership race down to seven as Bernier bows out


Just a few short days after his whistle stop tour of the Northwest, including a visit to Prince Rupert,  Mike Bernier has brought his campaign to become the next leader of the BC Liberals to an end end.

The former Liberal cabinet minister announced his decision on Saturday, posting his message to supporters through his website and social media platforms. 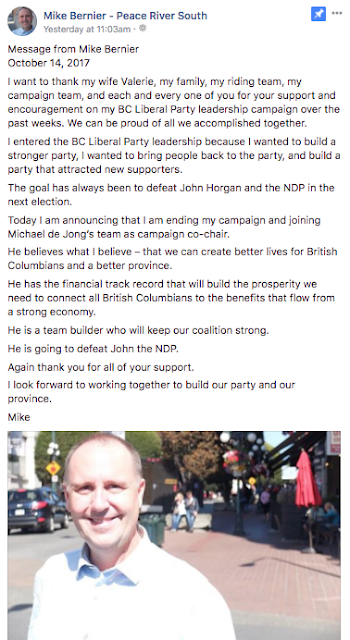 In announcing his decision, Bernier, the MLA for Peace River South shifted his support towards the campaign of Michael de Jong, where he will now serve as de Jong's campaign co-chair.

You can find more background on the Liberal leadership campaign from our Leadership tracker feature on our Darcy McGee portal.
Posted by . at 8:52 AM