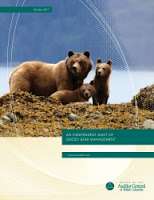 A new report on the management of the province's grizzly bear population from Auditor General Carol Bellringer, has provided North Coast MLA Jennifer Rice with her first topic of the week from Victoria, with the MLA taking to her Facebook portal today to provide her synopsis of the report.

From her review of the Auditor General's report, Ms. Rice highlights some of the key findings, observing that the document confirms what she and her colleagues have long said about the previous government's management of the grizzly bear population in the province.

The NDP MLA takes note of the past cuts to conservation programs and what she refers to as questionable science, as part of her overview of where the Liberals were wrong in their approach, with the North Coast MLA promising that the new NDP government will act on the recommendations offered in the new report.

Now that we have a new NDP government, the recommendations won’t fall on deaf ears. We’ve committed to implementing all of them.

The report fits well with current New Democrat policies to not only end the grizzly bear trophy hunt, but also end all hunting of grizzlies in the Great Bear Rainforest as well as the announcement of a renewed wildlife management strategy for the province. 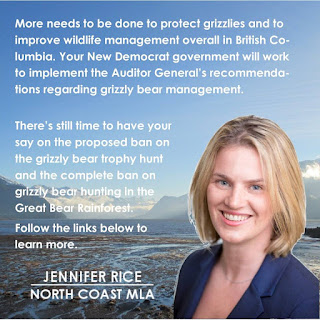 As part of the release of the report, a video presentation provides some further background and attention to some of the themes reviewed by the Independent Audit of the provinces Bear Management strategy.

The Ten recommendations from the Audit of the Grizzly Bear Management include the following (click to enlarge): 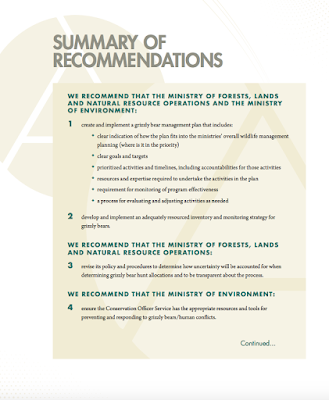 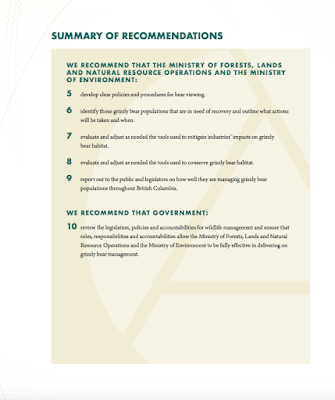 You can review the full document which also includes responses to the recommendations here.

The North Coast MLA also makes use of her Facebook notes to remind those in the riding of ongoing feedback process currently underway by the province when it comes to the proposed ban on Grizzly Bear Trophy Hunting, providing this link, to those that wish to participate in the engagement process.

For more items of note related to Ms. Rice's work at the Legislature see our archive page here.

A wider overview of the British Columbia political scene is also available on our political portal D'Arcy McGee.