Rather quiet roll out for City's energy efficiency initiative

The flurry of announcements related to upcoming public engagement sessions by City Council appear to have overshadowed a new initiative from the City, which is designed to take the pulse of the community when it comes to energy consumption and to offer up opportunities to reduce your bills and environmental footprint.

The City first made mention of their survey plans earlier this month, with this media release providing some background to the project.

As was noted in the information statement, during the course of last week, residents of the city received cards in the mail to offer up more notes on the project.

Those cards and the information that they provide can be reviewed below: 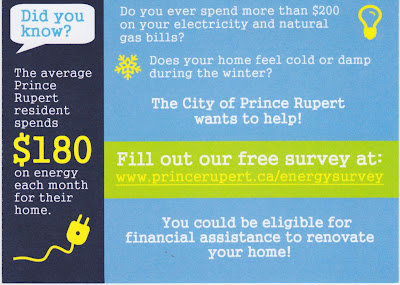 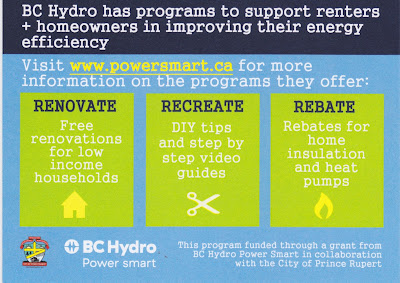 Considering the focus that Mayor Brain has put on environmental issues in the past, it was somewhat surprising that he did not take advantage of last Monday's City Council session to provide a bit of a preview of the survey and to explain further how the City will make use of the data and what benefits there may be for those that participate.

Nor has there been much mention of the survey, or reminders to participate through the Mayor's Social media stream since the project was announced.

Earlier this month, we made note of the first notice of the program which is made possible through the assistance of the BC Hydro  Sustainable Communities program.

City residents can participate in the survey from the City's website here.

The City's survey is part of an ongoing process related to Energy, Emissions and sustainability that the City of Prince Rupert launched earlier this year as part of its Community Energy and Emissions plan.

For more items related to sustainability issues and areas of note from the City see our archive page here.