A delegation from Northwest Community College will be in attendance at tonight's Prince Rupert City Council meeting, with the group set to make a presentation to update council on the college's plans to change the name of the post secondary institution for the region.

Included in the group to appear at Council tonight will be Sarah Zimmerman, NWCC's Director of Communications and Public Relations; NWCC Board Chair Herb Pond; VP of Education Justine Kohlman and Pouan Mahboubi, Dean of Instruction at the Prince Rupert Campus.

The NWCC delegation will make a brief presentation  to Council to outline some of the elements of their strategic planning process, the renaming exercise that the college has embarked on, as well what steps are to come as the college moves ahead with its plan.

A pair of correspondences related to tonight's appearance were provided as part of tonight's Agenda package, one seeking the opportunity to appear at council, the second a suggested template for a letter of support towards the name change efforts, should the City Council members decide to offer their support. 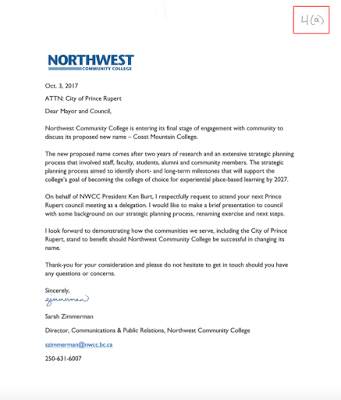 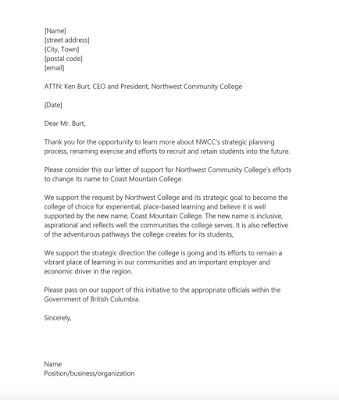 NWCC officials will no doubt be hoping that tonight's approach goes better than a recent request directed to School District 52.

As we noted on the blog on Friday, School District officials discussed the request at their October 10th Board meeting.

At the conclusion of their discussion on the theme, the School District decided that they could not support the college in its request to change its name, and will be tasking the Board Chair Tina Last to write a letter to the Ministry of Advanced Education to express their concerns over the proposed name change.

Tonight provides the first opportunity for Prince Rupert City Council to ask questions or outline their thoughts on the theme of the proposed name change, or to raise other issues of note related to post-secondary education options in Prince Rupert.

You can review some of the background to the name change proposal from NWCC below:

More notes related to Education ion the Northwest can be found here.

Further items up for discussion at tonight's City Council session can be reviewed from our Preview of tonight's work here.
Posted by . at 9:41 AM