Northwest hockey talent takes to ice in many locations this year 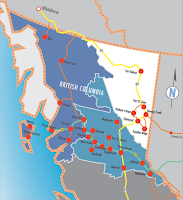 Hockey is in full flight in a number of communities big and small across British Columbia and Canada this fall and for many who once called the Northwest home, the opportunity to continue to play their sport at a high level continues along as their embark on their journey from many new hometowns.

From Junior hockey at a number of levels to the competition found in the Canadian Inter-University sports league, former minor hockey players from Prince Rupert to Fort St. James are representing their hometowns and in many cases making for quite an impression.

For Prince Rupert hockey fans there are three names to be watching for from the sports reports out of the lower tiers of Junior hockey in the province, with Prince Rupert represented by a pair of players, Judd Repole and David Smith, who are playing in the Kootenay Junior and Peace River Junior Leagues.

On Vancouver Island Reid Lindsay is in Campbell River, while Brady Ward is playing for the Selkirk College team in the BC Intercollegiate League.

A rising talent to watch for as well is Brett Fudger, who is playing Major Midget Hockey in Prince George and positioning himself nicely for the years ahead.

We will follow their progress below, updating the stats package roughly every two to three weeks.

The most recent date for the stats is listed as part of the review.

The anchor page for this update on the former Minor Hockey players of the Northwest can be found on our Prince Rupert Minor Hockey Association Archive page, the link to our PRMHA page is also found on our right hand column section.

Leagues that are included in our review below include:

Players from Prince Rupert
Stats as of December 27, 2017

In the Kootenay Junior League

In the Peace Junior League

In the Vancouver Island Junior League

In BC Major Midget Hockey

For other communities of the Northwest, the list is a growing one as players take to the ice in the top tier of Junior Hockey in Canada, as well as for teams in other Junior Leagues and Canadian University and College hockey.

The list of those players to watch can be reviewed below, listed by their home towns:

Players from Terrace
Stats as of December 27, 2017


University of Victoria -- BC IHL

Players from Kitimat
Stats as of December 27, 2017

Players from Smithers
Stats as of December 27, 2017

Players from Houston
Stats as of December 27, 2017

Players from The Hazeltons
Stats as of December 27, 2017

Email ThisBlogThis!Share to TwitterShare to FacebookShare to Pinterest
Labels: Northwest hockey talent across Canada/US 2017 and 2018