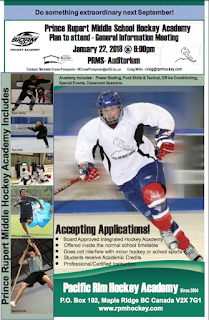 Parents and students looking to explore the Hockey Academy program at Charles Hays Secondary and Prince Rupert Middle School will get their first glimpse of the 2018 programs at an information session set for later this month at both of the city's schools.

Two hours later, parents and students at Charles Hays will hear the details for the program at an 8 PM session in the CHSS Library at the Prince Rupert Boulevard campus.

The Academy program provides instruction in power skating, puck Skills and tactics, Off Ice conditioning and classroom sessions. There are also special events associated with participation in the Hockey academy programs.

Students receive Academic credits for their involvement in the program which is offered as part of the normal school timetable and is designed so as to not interfere with minor hockey or school sports.

The program is run in School District 52 through the Pacific Rim Hockey Academy, which offers similar programs across the province.

The two local programs are described below:

More background on how the program work and contacts for more information about it is available from the Prince Rupert Minor Hockey Association website.

For more about School District 52 see our archive page here, while further notes about Minor Hockey in the Northwest can be found here.
Posted by . at 8:56 AM