Deadline looming for 2020 nominations for BC Achievement Foundation Awards

The Awards that celebrate British Columbians who go above and beyond in their dedication and service to others are in the final days of accepting nominations for 2020, with the BC Achievement Foundation providing some details on what you need to know to make it to the deadline of January 31st.

The work of the nominee must have taken place in British Columbia through volunteer or professional work and include such areas as:  Arts and Culture, Business Innovation, Civic Duty/Public Service, Communications/Media Education, Environment/Conservation, Healthcare, Multiculturalism, Science & Technology, Sports and Recreation, Volunteer Service Youth or Seniors' Leadership

The notes on eligibility are fairly simple, with the following parameters your guidepost to the nomination process. 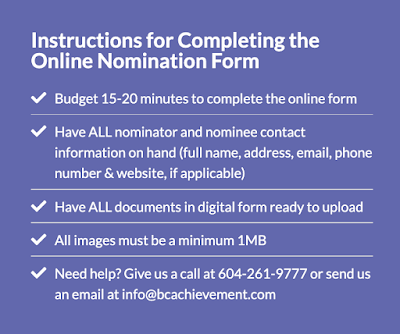 Awardees are recognized at a formal ceremony held in Victoria. The Lieutenant Governor and a representative of the BC Achievement Foundation are invited to present the awardees with the Community Award Medallion, designed by Robert Davidson, along with a certificate, lapel pin and letter from the Premier of BC recognizing their achievements.

The Awardees will be announced in March, with the Presentation Ceremony set for April.

For more items of note from the provincial scene see our Legislature archive page here.
Posted by . at 9:59 AM

Email ThisBlogThis!Share to TwitterShare to FacebookShare to Pinterest
Labels: BC Achievement Foundation Awrds for 2020