Operations Director pleased with launch of Curbside Recycling program, notes crews will only get better and better 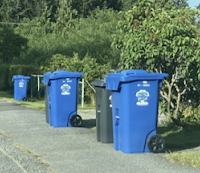 The launch of the City's recycling program made for some short conversation as part of the final portion of Monday's City Council Session, with the topic introduced by Councillor Nick Adey who asked for a review for the debut of the program.

Providing Council with the first week talking points on the much anticipated start up of the curbside program was Operations Director Richard Pucci, who sketched out how the roll out went despite the challenging weather situation of the first week of January.

"The first couple of days were a bit of a challenge and we ran a bit long, but we knew we were going to do that, and you know I think the crews are just getting better and better as they get more familiar with the routes ... it was probably one of the worst days to start this program, but I know that the community was excited for the program as was I, and I think all of us were.
And we just said, you know what we just have to do it and get out there and not postpose anymore and we were able to complete the routes, it was a little long, but  yeah we did it.
I think as this program moves forward over the next weeks and months, we will get better and better and get into a rhythm. So I'm really proud of the guys and  proud of the crews and our staff down at Public Works for understanding that this is a new service and all getting behind it"
As it is with the Operations Department's plans to review how the city approached the recent weather situation,  Mr. Pucci outlined how the city will be doing a "Look Back" on the Recycling launch as well, in order to review what has worked and what may need some changes.
"It's the same as the snow and ice, we will be doing a look back after we've run it a few weeks we've already made headway on getting a little bit better"
For their part both Councillors Adey and Cunningham praised the work of the city staff in the launch under challenging conditions.
The program which was originally scheduled to launch in September was delayed three months to allow for more preparation towards the city's new service, the collection now features a crew of three  per truck working the city's routes to collect both residential garbage a range of recyclable materials.
The City is making use of its newly purchased garbage truck which features an assist mechanism to dump the blue bin material into recycling side of the split bays.
Learn more about the City's Recycling program from the city website here.
Some of our notes on the Recyling program can be found from our Sustainable themes archives here.
You can review Mr. Pucci's overview from the City's video archive page here, starting at the 23 minute mark.

More notes on Monday's Council Session can be found from our Timeline feature.
A wider overview of civic themes and Council Discussion topics is available from our archive page.
Posted by . at 9:42 AM