1.5 Million dollars in grants or contributions delivered by City in 2021

The last entry in our look at the Statement of Financial Information reports for 2021 takes us to the distribution of city money towards local groups and organizations, with 2021 finding City Council approving of 1.5 million dollars in Grants or contributions for the year.
That makes for a decline in distribution from the year before when the City provided for close to 1.7 million dollars in grants or contributions
The list is very much one of large numbers and little ones, with five of nineteen recipients in the six figure range, the remainder of the list of amounts below 100,000 dollars, ranges from a a low of 42 dollars (in kind) for Prince Rupert CrimeStoppers to $27,000 for the BC SPCA.
The largest of the six figure amounts went to the Prince Rupert Library at 693,000 dollars.
That was followed by funding amounts for Tourism Prince Rupert ($237,913) , the Prince Rupert Golf Course ($160,00), Museum of Northern BC  ($150,2320  and Lester Centre of the Arts  ($144,450)
The full list can be reviewed below: 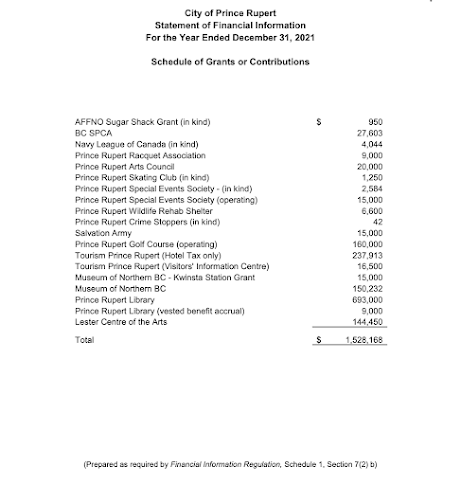 As we outlined yesterday, Prince Rupert Council received the report from Chief Financial Officer Corinne Bomben as part of Monday's City Council session.
You can review those notes and our archive of previous items related to the SOFI Report release here.
The City has yet to provide the video for the Council session to their YouTube Archive, once they have we will add that element below.
Update: The missing archive of Monday's session was added to the listings on the afternoon of Monday, June 20th.

The item above can be viewed starting at the 34 minute mark.

Further items of interest from the Financial office can be reviewed here, while some of the past Council themes are explored here.
Note: As is outlined in the comments section, the Tourism Prince Rupert distribution is taken from the Hotel Room Tax that is placed on all hotel rooms, the outline of that process is part of the commentary below.
Posted by . at 10:10 AM