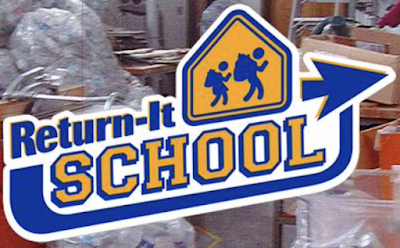 The Charles Hays Rainmakers Interact Club's 2022 work with the Prince Rupert Wildlife Rehabilitation Shelter is getting notice and this month also some acclaim at the provincial level.
That with success in the annual Return-It School Contest, the Prince Rupert Secondary School students claiming second place once again in the annual province wide competition.
This year, the selected community program for the Interact Club was the Wildlife Rehabilitation Shelter.
With the shelter lacking the capacity to process the returnable containers, the Club stepped in and processed all the containers left at the shelter and raised over $3,000.
The Club which runs the Recycling program at the school, also hosted their own bottle drive which raised over $400, as well the Club sponsored a Name the Owl contest on social media to raise awareness.
At the end of the counting, 102,500 beverage containers had been collected and more than $8,700 raised divided towards three directions.
4,000 dollars for the Prince Rupert Wildlife Shelter, $3,500 for Ukraine Disaster Relief and $500 dollars for the Volunteer Bursary at CHSS.
CHSS School Counsellor Tory O'Toole noted of the spirit of the Interact Club and their commitment to community.
The Prince Rupert Rainmakers Interact Club has once again demonstrated that the recycling of returnable containers not only helps the environment; it also helps the school, community and others in need of assistance
It marks the second year in a row that the program has been honoured by Return-it, they were among four schools heralded for their work in 2021-22.
Last year the CHSS Rainmakers Interact Club was saluted for their Sea Bin project.
We explored some of the background to that venture which is in partnership with the Prince Rupert Port Authority last October.
The Charles Hays students will receive $2,500 from Return It in recognition of their work.
The salute to the Charles Hays Students and the other schools can be explored further here.
More notes on Charles Hays Secondary and education in Prince Rupert can be examined here.
Posted by . at 6:05 PM