First in line for Alaska! AMHS Service to and from Prince Rupert resumes tonight

Today's a big day for Transportation on the North Coast with the return to Prince Rupert for the Alaska Marine Highway System and the sailing of the MV Matanuska later today for its transit to the city with an arrival time of 10:45 PM

The return trip to Alaska marked on the scheduled as an 11:15 PM departure.

The seven hour transit each way marks the first ferry sailing between Prince Rupert and Ketchikan since November 25th of 2019.

The return of service was announced in March of this year, with a light schedule to ease into the return to Prince Rupert, through the summer there will be two sailings in June, July, August and one in September.

The vessel sailed under the radar so to speak earlier this month, when it conducted a test sailing to ensure everything would run smoothly for the official return of service for today.
The sailing today which leaves Ketchikan at 3:45 PM is already having some impact on the local business community with a number of American licence plates spotted around town at Safeway, Save On Foods and Walmart, that as travellers pick up some last minute supplies for their trek north.
Other travellers arrived a few days prior to today's sailing and took advantage of some local accommodation options.
Todays' relaunch of the service was also noted by the Canadian Consul General in Seattle. 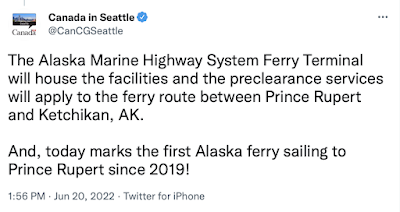 Some notes on the return from earlier this year can be reviewed below:
April 4 -- Hiring time for Alaska Marine Highway System in Prince Rupert
March 9 -- On both sides of the A/B line, the return of AMHS service to Prince Rupert has been well received
March 7 -- Alaska Marine Highway announces plans to restart Prince Rupert to Ketchikan service with sailings in June
More notes of interest on both the AMHS and BC Ferry service on the North Coast can be explored further from our archive page.