Paving contract issued, work to start within month on City's list of road work for 2022

Prince Rupert based Adventure Paving has been awarded the 2022 City of Prince Rupert paving contract, the City's Director of Operations Richard Pucci making the announcement in response to a question from Councillor Gurvinder Randhawa at Monday evening's City Council session.

"I gave a memo to Council earlier this week. We've awarded  the paving program to Adventure Paving and with that award they have said that they would start within a month"

The to do list was included as part of the Bid package  which was issued earlier this spring, an RFP that Adventure Paving was successful towards. 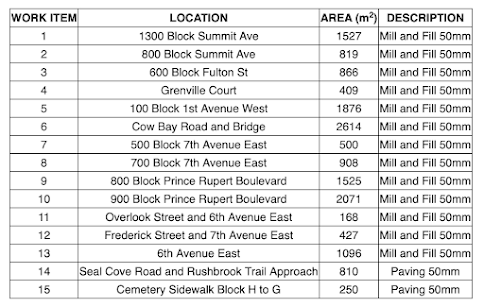 However as the City's Chief Financial Officer warned earlier this month, the amount of paving to take place this summer could be impacted by the rising cost of oil, something which is making for some challenges for city planning.

"As mentioned above, increases in oil will have impacts on the City's paving program and will likely result in less linear paving, extremely poor condition areas are the focus given the current limitations" -- CFO Corinne Bomben speaking at the June 13th Council session on the impact of oil prices on the city's road plans for 2022

The city's paving program does not include the current situation facing McBride Street which will also require paving upon completion of the waterline replacement work.

The City project will be just one of a number of major projects for the local paving company, with Adventure Paving also securing work on the Port's road connector from the DP World container port to Ridley Island.

Paving the roads wasn't the only theme for the city's streets on Monday, as Councillor Barry Cunningham making note of the current bit of good weather asked Mr. Pucci about a return date for the line marking crew that was in town recently.

The Operations Director offered up a hopeful timeline for the work ahead.

"As we've talked about in the past, there's really only one localized contractor that does this work and so they're doing a bunch of communities, so they come in do a little bit in every community, we're hoping to have them back within the next couple of weeks.

They are not here right now, they've went and done another community but they will be back"

You can review the road themes from the City's Video Archive starting at the one hour, fourteen minute mark.

More notes on the city's infrastructure themes can be reviewed from our archive page here.

A wider overview of Monday's Council session can be found here.