Prince Rupert City Council moved the process towards development of a Pump Track in the community ahead one more step on Monday evening, with Council receiving a report from Corporate Administrator Rosa Miller  and then approving a motion to execute a Licence of Occupation for the site adjacent Hays Creek in the McClymont Park area.

The report which we previewed on Monday, noted that one of the conditions for the track is that the NCMBA ensure that it continues to hold the appropriate insurance for the use intended.

The prospect of another recreation area activity for the community was well received by Council Members on Monday, though they did make for a few observations on the plan and its impact on the site chosen.

Mayor Brain reinforced some concerns over Emergency access and asked the Operations Director for an update on those notes.

"Just one question I had, when we announced this back in December there was some questions about Emergency vehicle access on the Sherbrooke side of things and potentially having access for like paramedics to be able to get down there ... I don't know if maybe Richard or Rob have that information or not - but is that discussion still happening, or.

Because the challenge was that you were putting this bike track kind of away from any roadways and if there was an injury or something happens there, the only real access to that is Sherbrooke and I know that we have a truck path right now  for our city trucks to get down. But that was I would say a primary concern from folks around that area"

The City's Director of Operations field the question. noting of the current situation.

"The primary access right now is either by foot, or we the opportunity to have a pick up truck access through the Sherbrooke entrance. We have not contemplated any additional access at this time, however we can look at it if Council is interested for us to look at it.

The Mayor from that answer noted that the primary concern was that a vehicle can get down there and that was the most important thing.

Councillor Adey added to that conversation, noting of a passage from the report.

"I note on the analysis portion of the report it does say that the Operations Department has also requested that they include upgraded paved access to the track to tackle accessibility constraints and increased lane for safety ... so it may be that somewhere in there, there is a way to kill a couple of birds with one stone"

Councillor Cunningham had questions related to the impact on the walking path along Hays Creek.

"The Walk path because that's fairly well used,  is there going to be  a fence between the Pump track and the walk path or could there be spillage over or stuff like that, it could be a bit of a safety concern that's all.

I think its a great idea and I'm happy to see its happening, it gives a lot of kids a place to go and that. But I'm just a little concerned about that gravel walk path right next to the creek"

The Mayor picked up on that theme, noting that the NCMBA hasn't finalized their design yet and that would be something that the city could talk with them about.

He also observed how it's a good news item and a good recreation opportunity for the community.

Council will now forward the topic for public notification 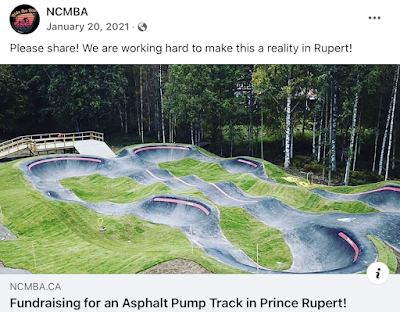 The NCMBA is currently fundraising towards their proposed track, you can learn more on that and other notes on their plans from their Facebook page.

The City has yet to provide the video for the Council session to their YouTube Archive, once they have we will add that element below.

Update: The missing archive of Monday's session was added to the listings on the afternoon of Monday, June 20th.

The item above can be viewed starting at the 36 minute mark.

Further items of interest from past Council themes are explored here.
Posted by . at 9:49 AM