A two part process for consideration of an Omnibus Bylaw on Zoning Amendments saw a mix of public comment and council discussion chart the course ahead for most of the large volume of elements for the proposed document.

A process on the night that left one of the elements, that related to the registration of Shipping Containers for use by residents  on the sideline pending a wider review and report from City Staff. 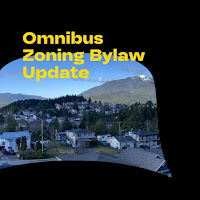 The Monday night work was the latest stage of consideration following a consultation period hosted by the City through it's Rupert Talks portal, with the Public Hearing on the night identifying some key areas of concern from two members of the community.

The 6 PM Public session only lasted fourteen minutes, the opening providing for a review from City planning staff to refresh Council's memories on some of the key elements.

The forum was then turned over to the public with one participant Mr. Terry Sawka speaking to concerns he has over some of the secondary suite provisions and notes on the veterinary clinic element.

On the clinic question he inquired if the additional opportunity for those facilities would see them migrate into residential areas.

Planning staff clarified the element surrounding the veterinary clinics, confirming that they would not be allowed in residential zones.

Mr. Sawka's concerns on housing spoke to the added prospect for increased density for current single family homes, suggesting that the city is trying to solve a problem by converting single dwelling  homes into multi dwelling homes, something the took issue with.

He also highlighted how some rental properties that remain vacant for a range of reasons or are used in the way of short term residence.

His main focus was related to the theme of parking and how the expansion of residences would take up space in neighbourhoods creating more problems for those living in the area.

Planning staff also outlined the parameters related to the addition of secondary suites and parking requirements towards those developments.

The Corporate Administrator also delivered the comments from a local resident, Rick Casey towards the shipping container procedures.

His concern was that there is a need for registration of the Temporary Permits being issued and the containers arriving on site, suggesting a need for documentation for tracking of the timeline of use for the containers.

The full Public Hearing can be reviewed below:

The Topic returned as part of the Regular Council Session, with the Zoning Amendment Bylaw up for its Third reading.

The Discussion by the Councillors took up close to half of the night's one hour and seventeen minutes, with Council members speaking to the the two themes outlined in the Public Hearing.

Councillor Mirau took the lead on the topic of additional rental opportunities, speaking to the issues raised by Mr. Sawka.

"I did feel the need to respond to the one issue that was raised in the Public Hearing because it is something that we've heard quite a bit in almost every upcoming application where we're talking about increasing density. And it's people that are taking issue with converting single family density into multi family dwellings and so.

I mean I think there's two primary concerns, the idea of density was pretty well articulated that someone doesn't want to live in a single family home and have a duplex, or triplex or fourplex next door and then parking was the other one.

But there's a couple of reasons that I remain unconvinced to vote against these bylaw changes based on these issues.

We are talking about one per dwelling, it's not a carte blanche permission for someone to go out and build in any single family home, they need to be able to satisfy our parking requirements.

It's not an ability for everyone to do anything without permits they still have to go through the development permit and building permit process.

Towards what the city is trying to do, Mr. Mirau spoke enthusiastically about how Council is approaching the housing issues in the community.

"When we talk about creative ways to expand housing beyond the construction of single family homes, to avoid the high capital cost of construction, this really does fit the bill. And Prince Rupert is already recognized  as being in the top ten in the province for having this is a creative housing solution.

It's a great mortgage helper for new home owners, flexibility for multi-generational families, for people who are care givers it's a more affordable rental option for you know singles and couples"

The shipping container concerns proved to be a bit more problematic for Council to solve on Monday.

Councillor Adey tried to offer up a solution, championing the concerns of Mr. Casey from his written contribution to the Public Hearing, to which the Councillor added a few thoughts.

"I think in our current version of the way the regulations work if you do some tours of some neighbourhoods you might draw the conclusion that if they're not permitted in residential areas somebody must have missed the memo, because you see them in many places and I think some of them have gone through the hoop of applying for a temporary use permit, whether that's been granted would be unique to each circumstance.

So I do think that there's something not working about what we have had in the past.  I think the intention is that they not become a visible and permanent part of our residential areas. So I think we need to bear that in mind, that has to continue to be our intention "

Combining the concerns from the Public Hearing with his own contribution to the discussion, Mr. Adey constructed  a solution for the temporary use for a short term basis for any special circumstances such as flooding or property damage.

The amendment for the shipping container element would see what the councillor called a common sense provision to clean up the language to the issue.

"I think that we can clean it up a little bit if we require that a container that is going to be used for sixty days in place is registered with the city and that there is some kind of a roadmap for what happens at the end of that time ...

That Shipping containers  are permitted for up to sixty days for temporary storage in all zones ... that containers in residential zones be required to be registered with the city and the city will provide indication of that registration and that the owners be responsible for removing at the end of the sixty day period"

Councillor Niesh spoke in favour of that suggestion, offering up a few of his thoughts on how it could be implemented.

Councillor Cunningham also found much to like from Councillor Adey's observations.

The potential solution  however raised some ares of concern for Councillor Mirau who outlined  his thoughts on any potential impact on staff and why he was not in favour of voting for the motion on the night.

"If I was to ask the question is that to administratively burdensome  or time consuming, or where are we going to get the staffing capacity. What is going to be the impact on City staff who ultimately have to administer this new program as we're talking about it. I would really like to get a better understanding on that front before I would vote in favour or against. So I'm not prepared to vote in favour tonight without that information"

From there, the bulk of the conversation among the councillors got bogged down on the elements of the process and procedures required to move it forward.

With City Manager Rob Buchan not on hand for the evening, it was up to the Deputy City Manager Corinne Bomben and the Corporate Administrator Rosa Miller to try to keep the Councillors on track for the delivery to third reading of the bulk of the Zoning amendment elements that they did agree on.

To move those elements forward, Council then chose to put aside the Container element, to refer it to staff and await a report with the details towards what the program would look like and then to reintroduce it at a later date.

Beyond the container issue, Councillor Cunningham  outlined a few of the other areas of the larger document where he would like some additional information from staff as well.

To bring the conversation to a close,  Corporate Administrator Rosa Miller provided some clarity the approach that Council was planning to take on the evening.

"To be very, very, very clear, you are looking to pass the existing amendment with the removal of the section 3.19 of the bylaw that references shipping containers'

The next Council meeting will provide for the fourth and one imagines hopefully the final approval of the  document.

The Report to Council from Planning was part of the presentation in the Public Hearing, you can review the full scope of the amendments here.

The full Discussion can be reviewed through the Regular Council Session, starting at the thirty two minute mark.

More notes on Monday's Council Session can be explored through our Council Timeline Feature.

Our preview notes from Monday outlined some of the history of the proposed amendments.