The City's newest infrastructure headache made for two segments for Monday Night's Council session, with City Councillors receiving and approving the request from the Chief Financial Officer for an amendment to the Five Year financial plan, that to address the one million dollar tab for the project.

Also included in the amendment was a 175,000 dollar upgrade for the Digby Island Ferry Ramp. That to be taken from Capital Reserves.

Towards the waterline issues on McBride, CFO Corinne Bomben delivered a report that noted how the loan requirement would be handled by the city.

"The second item proposed in the amendment is to make the needed repairs to the failed section of McBride Street caused by the watermain leak. Proposed funding for the anticipated cost of one million dollars is through water surplus in the amount of 150,000 and a short term borrowing over five years of 850,000 repayment of the debt is proposed through Prince Rupert Legacy Inc. 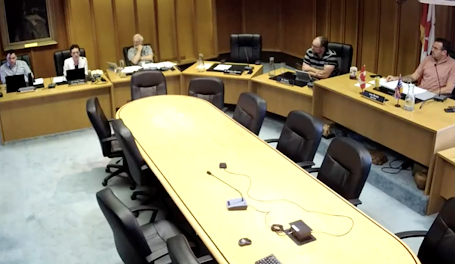 Ms. Bomben also noted that the notice of the amended Financial plan was posted to the City website and the bulletin board at City Hall.  As part of that notification process, the public had been asked to submit comments, wth the CFO noting that by the end of the day (Monday) no comments had been received.

The topic provided for a question on infrastructure funding from Councillor Nick Adey who noted of the use of the reserve funds and Legacy mechanism in this instance.

"I would just note that, I appreciate the flexibility, or the responsiveness that we were able to generate through mechanisms like a reserve fund and through our own unique example of Legacy. I guess I would wonder what would happen if unforeseen events brought us to a point where both of those sources of responsiveness became taxed ... that's a bad choice of words ... became strained to the point where they were no longer going to be so easily drawn upon. Is there a sense that, that would incur a different process from us?"

Towards an answer, Ms. Bomben outlined that without those elements, water rate increases and a larger burden on the taxpayer would be the likely outcome.

"As far as the loan repayments, it would just be a part of, it would  be built into water rates and 850,000 dollars is actually a sizeable increase for water rates. So that would be difficult. We don't have much surplus left in our water fund, mainly because we have so many water breaks and we use most of our capital funding for just emergency repairs.

The capital reserve funds that you are referring to, you'll recall that  in the Budget this year in the original Five Year Financial Plan we did allocate 400,000 dollars to capital reserves and that did actually result in, made up a component of the tax increase that was passed by Council.

Those are the mechanisms by which Council could generate,  raise the funds for any of these particular misfortunes. We are fortunate that we've been able to turn Watson Island into a bit more of a revenue generating opportunity to be able to offset many of these capital costs, whether they're planned or unplanned as in this instance"

The second mention on the night came at the end of the Council session and an question from Councillor Randhawa as to the progress of the work on the site itself. 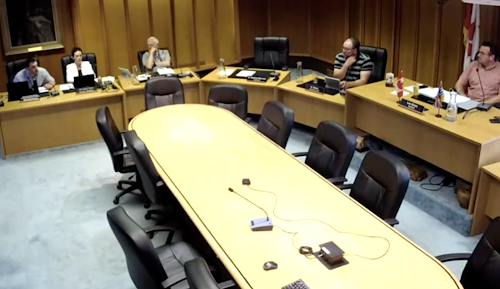 Richard Pucci, the Director of Operations fielded that enquiry, outlining the plan ahead.

"So, at this point right now, we're still assessing I would say. So we've got everything exposed I would suggest that it will probably be about three weeks before we would be back together.  But the road will probably still remain closed with maybe some light traffic on it due to paving.

So the project likely with the piping will back in in three weeks maybe a month, but then it would likely remain closed until paving is complete, just because it is a Ministry Highway on a hill"

Both reports can be viewed through the City's Video Archive, Ms. Bomben's contribution starts at the 28 minute mark, while Mr. Pucci's observations some at the one hour thirteen minute mark.

The timeline for the McBride street work from Mr. Pucci however may need to be extended somewhat it would seem.

That as work appears to have come to a complete stop on the site since last week.

The cause of the stoppage one which a sharp eyed social media follower stumbled across recently, seems to be related to a recent WorkSafe BC Stop Work order, the discovery if the document since posted to the Prince Rupert Community Bulletin Board portal.

The snapshot now making for the start of an unofficial sounding board of sorts for the community on the state of the project.

There was no mention or update on the status of that Stop Work Order delivered as part of the Monday council session.

More notes on the McBride Street work can be reviewed through our Infrastructure archive page here.

Further notes on Monday's Council Session can be explored through our Council Timeline feature.