Climbing the Staircase of Inclusion

The second of two community painting projects through Transition Prince Rupert wrapped up on Saturday, with an energetic group of volunteers putting a new look on the Stairs in the downtown core leading from Fraser Street to Borden Street.
Among those who helped out Transition Prince Rupert on the staircase were members of Change Makers Education Society and the GSA at PRMS/CHSS, they along with a number of other helpers had the job wrapped up in just three hours.
The community painting in project was just one of a number of activities over the weekend as part of a calendar of PRIDE events in  Prince Rupert.
The City of Prince Rupert lent an assist as well with a pressure washing of the staircase prior to the event.
The Fraser to Borden Stairs made for the second staircase project of the month for the local community group. 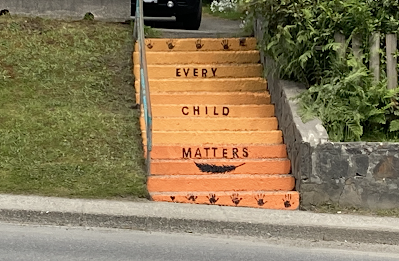 Last week we outlined the work that took place on a Staircase from McBride to 7th Avenue East, which highlights the message that Every Child Matters.
You can review more photographs from the twin projects through the Transition Prince Rupert Facebook page.
More Community Notes can be explored here.
Posted by . at 10:13 AM